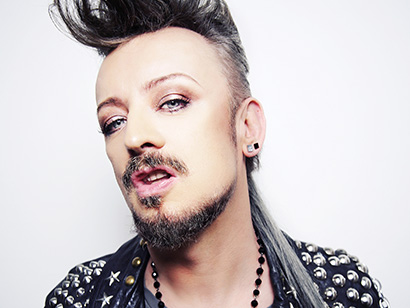 LGBT pop icon Boy George is under fire over a tweet in which he appeared to suggest that bisexual people are actually just closeted gays.

The star made the comment in response to claims by George Michael’s ex-boyfriend, Fadi Fawaz, that his twitter account had been hacked following a series of controversial tweets about the singer’s death.

“Ok. ‘My computer got hacked’ is like ‘I’m bisexual’ or ‘I’m sniffing because I have allergies!” reacted George sarcastically.

He was quickly taken to task for biphobia and bisexual erasure; essentially perpetuating the belief that bisexuality is not a legitimate sexuality.

San Jose Left Shark wrote: “@BoyGeorge but actual bisexuals were upset by your words. We have enough trouble getting the world to acknowledge our existence already.”

The star, who is currently appearing in Celebrity Apprentice in the US, dismissed his critics as “humourless”, insisting that, “Lot’s of people use ‘bisexual’ when they really mean ‘gay’,” adding, “but that doesn’t mean some people are not genuinely bi.”

An article by Karen Pollock on The Queerness slammed George as a “bully” and “the tame pet of hetronormativity” who while once relevant should be now be rejected by the queer community.

“Cis het people might be entertained by his outdated act, but it’s time for the queers to start holding our heroes to a higher standard,” wrote Pollock.

Lewis Oakley commented in a piece for PinkNews: “…the ‘bi now gay later’ stereotype is a serious, delicate and potentially volatile topic. As an older gay man he should understand that and not cheapen the issue in a failed attempt to sound sassy in a tweet.”

Critics have pointed out that studies in the US have shown that bisexual people face numerous challenges, including higher rates of anxiety and depression compared to heterosexuals, lesbians and gays. Bisexual people’s sexuality is often not taken seriously and is treated with suspicion, not only in wider society but also within the LGBT community itself.