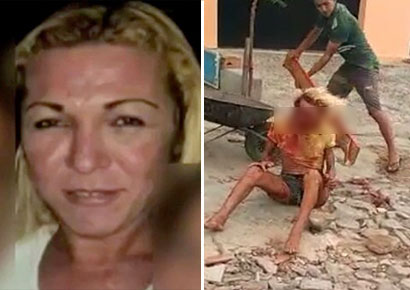 There may yet be some justice for Dandara dos Santos, who was beaten on camera by a group of thugs last month before being murdered.

The 42-year-old transgender woman was filmed pleading for her life as she was kicked, punched and attacked with a wooden plank in Fortaleza, Ceará state, Brazil.

Her murderers taunted her with homophobic and transphobic comments before dumping her in a wheelbarrow and carrying her away to be beaten and shot dead as the laughing cameraman watched.

The local media has now confirmed that an eighth, 21-year-old, suspect has been arrested in connection with the brutal killing.

Following an anonymous tip-off, he was found by the military police at a house near his grandparents’ home. The other suspects include three adults, aged 18, 19 and 25, and four minors aged 16 and 17.

André Santos Costa, the secretary of public security in the state of Ceará, told Globo that the killers were “cowards and vagabonds”.

He added: “We need more education and guidance for people, to learn to respect others. Intolerance only has negative consequences.”

On Wednesday, a mass was held to commemorate a month since Dandara’s murder. Her mother, Francisca Ferreira Vasconcelos, 75, was quoted as saying: “It is a great pleasure to see these people together here and to know that everyone loves Clenílson [Dandara’s birth name], who was a person who only had kindness in [her] heart.”

During the mass, Father Expedito Telles, told Francisca: “Your motherly love and God’s mercy are greater than that. This was a tragic crime because we live in a society that hates women.”

According to a report released in January, an LGBT person is murdered almost daily in Brazil, with transgender women and gay men bearing the brunt of most of the violence.