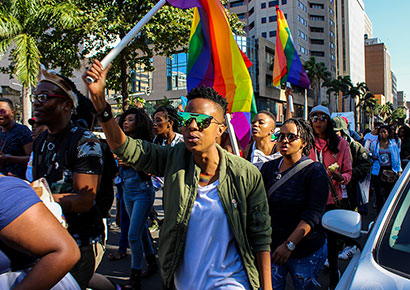 Hundreds took to the streets last weekend for the annual Durban Pride march to demand equality and the right to freedom and self-expression.

On Saturday morning, the city’s LGBT community gathered at Gugu Dlamini Park, named after the young woman who was stoned to death in 1998 after coming out as HIV positive.

After a series of speeches, a diverse group of around 900 people marched through the city centre; chanting, singing and waving rainbow flags. Many carried placards denouncing violent hate crimes and social and religious intolerance.

Some also took the rare opportunity to express public affection with their same-sex partners.

This year’s Pride theme was “Hands Off My Body! Hands Off My Rights!” and sought to address the recent spike in attacks against the LGBT community and women and children across South Africa. 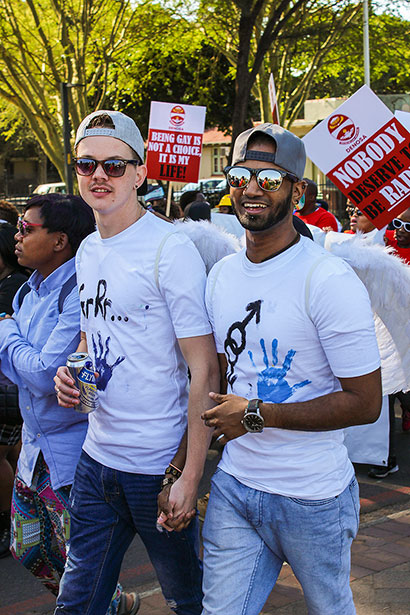 After the march, the participants settled into an afternoon of entertainment and socialising, which attracted over 2,000 people throughout the day.

Durban Pride is the largest LGBT event in KwaZulu-Natal, a province known for its conservative cultural views.

“We hoped that it would be one of our greatest Prides, in terms of political visibility. And I think we achieved that,” said organiser Nonhlanhla MC Mkhize, Director of the Durban Lesbian and Gay Community and Health Centre.

Addressing criticism that the event was not well publicised, Mkhize admitted that the organisers faced limited resources and disinterest and red tape when it came to support from the eThekwini Municipality.

Mkhize also explained that the Pride was moved from its previous beachfront home both due to increased restrictions from the authorities, as well as a desire to embrace the symbolism of holding the event in the busy CBD and the iconic park.