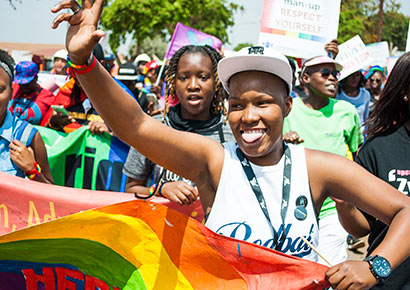 Hundreds of members of the LGBTQ community took part in the 12th annual event at the Dorothy Nyembe Park in Dobsonville on Saturday, under the theme of ‘Reclaiming our right to organise!’

The day began with a midday protest march from the park through the streets, attracting curious onlookers and supporters who hooted from cars and waved from houses along the route.

After returning to the park, the participants were presented with speeches, poetry and entertainment, as well a variety of community and food and drink stalls.

The focus of much of the messaging was around the safety of black lesbian women in particular who have borne the brunt of hate crime attacks against the LGBTQ community. A long list of names of women who lost their lives because of their identity was read out on stage.

The Pride was a triumph for the organisers, Forum for the Empowerment of Women (FEW), who last year were forced to cancel the event just days before it was set to take place when the authorities threatened to shut it down.

The police, emergency services and City of Johannesburg classed Soweto Pride as “medium risk” and added a number of restrictions to the event. This resulted in unexpected, last minute costs that FEW were unable to fund.

This year, the event was re-classed as low risk and organisers were able to accommodate the restrictions.

“Yes, Soweto Pride is back,” Siphokazi Nombande, Operations Coordinator at FEW, told Mambaonline. She said that the organisers were happy with the overall success of the event which took place without any incidents. 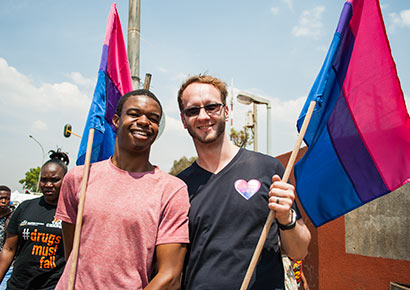 Nombande, however, expressed disappointment that the majority of participants did not take part in the march itself and only arrived at the venue for the post-parade celebrations.

“We should have had more people attending the march rather than the festivities in the afternoon,” she said. “They key thing for us is the march. People should notice the importance of the actual march. That’s something we have to improve on.”

Nombande hopes to next year involve more community members in the organising of the event. “Soweto Pride is a community event, it’s not owned by FEW. We want people who have organising skills to come forward. More people should be involved so that they can claim Pride for their own.”

Below is our exclusive gallery of images of Soweto Pride 2017.