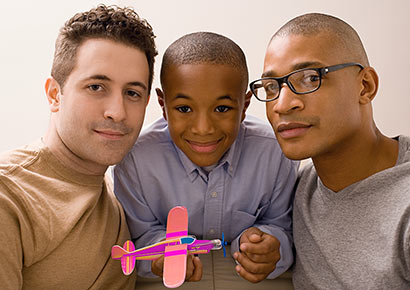 Questions have been asked about a Pretoria High Court ruling that barred a gay couple from surrogacy, apparently because one of men is still in the closet.

According to reports, Judge Ronel Tolmay gave two primary reasons for refusing to approve a surrogacy agreement between a woman and the couple of ten years, identified only as CJD and HN.

First, Judge Tolmay said that HN’s fear that his medical practice would be affected if he came out would be detrimental to the child. She suggested that HN being in the closet could lead him to not acknowledge the child in public.

“A lot of scenarios come to mind. I can see a little toddler excitedly running towards his father in public, shouting out ‘daddy’… Would the father pretend not to be the parent? How would this impact the child,” Tolmay asked.

Then, despite acknowledging that the two men are in a loving and stable relationship, Tolmay also rejected the application because they live in separate homes, although they spend much of their time together.

Pretoria attorney and LGBT rights activist Coenie Kukkuk said he does not believe that the judge’s ruling was discriminatory.

“Judge Ronel Tolmay is one of the most progressive judges on the bench. As an advocate she took on many cases for LGBTs when she still practiced law,” he told Mambaonline.

“I can assure you that this judgment is in the best interest of the child. The High Court is the Upper Guardian of all children and a decision like this would not have been lightly made,” Kukkuk insisted.

Johan Meyer, Health Manager at OUT LGBT Well-being, however, expressed his concern about the judgement, commenting that the couple appeared to have been held to higher standards than heterosexual people.

While admitting that he had not read the full ruling, going on the media reports, “it just sounds to be based on preposterous assumptions, or scenarios,” he said.

He noted that while the couple might not live together, they have been in a stable relationship for 10 years. “This is more stable than most relationships,” Meyer argued. “The judge acknowledged this fact, but then seemed to have disregarded the significance thereof.”

He said that many single or divorced heterosexual parents do not live together and that children often live between two homes.

“A single heterosexual person could have a child, simply by having sex with someone they don’t even know, without anyone having a say about it,” Meyer continued.

“Going the surrogate route to have a child happens to be very expensive. This is surely something showing the couple’s commitment to having a child and something they had been thinking through thoroughly.”

Meyer furthermore dismissed Tolmay’s hypothetical scenario of HN refusing to acknowledge his child in public. “I cannot see where this scenario the judge mentioned would play itself out. Based on everything else we know, it seems unlikely that the partner – who happens to be in the closet – would deny knowing his child.”

Meyer added: “It appears that two sets of rules apply when it comes to gay people.”