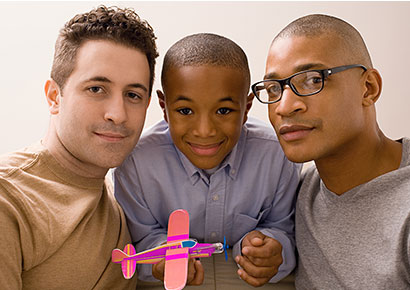 A gay couple are taking on the government of Namibia to have their same-sex marriage and adoption recognised by the state.

Namibian Johann Potgieter married his South African husband Daniel Digashu in South Africa in August 2015. The couple are in the process of adopting a young boy.

However, neither their relationship nor family is recognised in Namibia, which has affected Digashu’s and the boy’s right to live in the country, to where they moved in April.

The men have filed an urgent application in the Windhoek High Court against the government, the Minister of Home Affairs and Immigration, the Attorney General, the Immigration Selection Board, the Immigration Tribunal, and the Ombudsman.

According to The Namibian, they are asking the court to order the government to issue a certificate of identity to Digashu as Potgieter’s spouse, to recognise their marriage and family, and to recognise an order of the High Court of South Africa that gave them guardianship of their son.

The couple have been raising the eight-year-old boy since his mother, Digashu’s aunt, died in 2014. They have been granted permission by the court in South Africa to take the boy to Namibia while the adoption process is underway.

Since moving to Windhoek, the family have faced numerous hurdles and instances of discrimination from officials at the Ministry of Home Affairs and Immigration. Digashu has been forced to go in and out of the country on various visas.

One experience saw a senior official reportedly telling the men: “I have never met people like you in my life. I don’t know anyone of your kind. Who is the husband and who is the wife in the relationship?”

Digashu said in court papers that this was “extremely demeaning, humiliating and degrading” adding, that “We were ridiculed and at the same time powerless to do anything. It was one of the worst feelings we have ever felt.”

Friedel Dausab, Director of Out-Right Namibia (ORN), told Mambaonline that he had contacted the lawyer representing the couple to offer them the organisation’s technical and moral support.

“The case forces our hand to deal with issues on marriage equality and same-sex adoptions and parental recognition,” said Dausab. “We would like to support the couple and work towards a win for the sake of all LGBTIQ+ folks in Namibia.”

Dausab believes that the men have a strong case. “They already live as parents and as a family and are asking for protection. This is their right,” he said. “Their success or failure could have far reaching consequences for any other LGBTIQ+ person dealing with the Namibian legal environment in the future.”

All the respondents in the case, except for the Ombudsman, John Walters, have opposed the couple’s application. In August, Walters said that he was not opposed to the idea of same-sex marriage and believed that discrimination on the grounds of sexual orientation should be prohibited.

In 2001, Namibia’s Supreme Court ruled against a Namibian woman, Elizabeth Khaxas, and her German partner, Liz Frank, who sued to have their relationship recognised so that Frank could live in the county. Despite losing the case, the Ministry of Home Affairs ultimately granted their request a year later.

Consensual “sodomy” is illegal in Namibia and could be used to prosecute gay men, although this is not believed to have happened since the country’s independence in 1990.