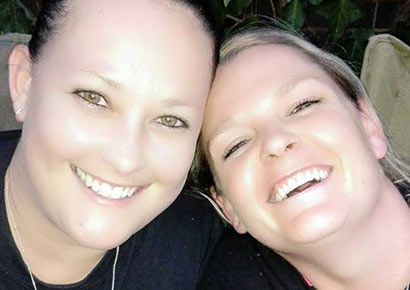 A lesbian couple from Mooinooi in the North West province are believed to have been tortured, raped, murdered and set alight, allegedly by seven people.

Anisha (30) – a manager at an Anglo mine – and Joey van Niekerk (32) went missing on 10 December when they set out to drive to Pretoria for a family funeral.

They never arrived at their destination and their burnt-out vehicle was later found in the Magaliesberg area.

Police were then led to burnt human remains hidden in bushes near Mooinooi, believed to be those of the two women. The authorities are awaiting the results of forensic tests to confirm the bodies’ identities.

The couple have been described as “life partners” in some reports, but they were married (based on a Facebook post, possibly since 2014).

According to Rapport, the women were hung up in a shipping container, tortured and shot dead, after which their bodies were set on fire.

It’s not clear if the murder was linked to the women’s sexuality. Anisha’s brother, Wynand van Niekerk, believes they were killed by someone who was trying to force the couple to sell their smallholding in Mooinooi.

Seven individuals, including a minor and others aged 18 to 39, have been arrested and appeared in the Brits Magistrates’ Court last week. Family members of the two victims and other community members attended the hearing on Friday dressed in black.

It’s been reported that some of the suspects led the police to the bodies of the women after being arrested in connection with their disappearance.

According to Wynand, the murder scene is on the property belonging to one of the suspects, a panel beater. The others arrested are reported to be the man’s minor son and the boy’s 18-year-old girlfriend and four of the man’s employees.

The accused face charges of murder, rape, kidnapping, robbery and the unlawful possession of a firearm.

Wynand believes that the panel beater wanted the women’s land because his workshop is located on the property.

Pretoria attorney and LGBT activist Coenie W. Kukkuk has crticised the Afrikaans media for failing to state in initial reports that the women were married, which he believes was an intentional and homophobic omission.

“The couple did not hide this – why should the Afrikaans media pussy-foot around their marital status?” he asked. “It is clear that their families cared a lot about them and accepted them – why should the rest of the country not also embrace them as that which they were; two women, very much in love and married to each other, who came to a very tragic and cruel end.”

Kukkuk added: “It raises questions that LGBT lives are ‘worth less’. Their status should be taken into account. It does not help ignoring the fact that they were lesbian.”

The case will resume on 10 January, when the suspects are expected to apply for bail.