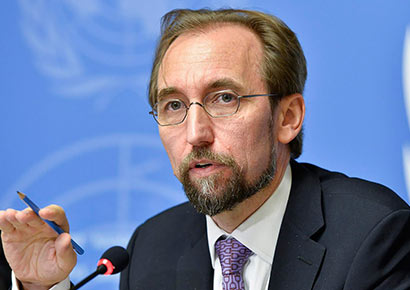 Speaking at a press conference in Jakarta on Wednesday marking the end of an official visit to Indonesia, Zeid said he was “greatly concerned” by efforts to pass a bill outlawing homosexuality.

The proposed amendment to the penal code would ban sex outside of marriage and same-sex relations with up to five years in prison.

The bill reportedly has the support of the country’s main political parties and comes amidst heightened religious radicalism against LGBT people.

“The extremist views playing out in the political arena are deeply worrying, accompanied as they are by rising levels of incitement to discrimination, hatred or violence in various parts of the country, including Aceh,” said Zeid, who is also the Jordanian crown prince and himself a Muslim.

Homosexuality is currently legal in most of Indonesia – the world’s most populous Islamic country – except in the Aceh province, where penalties for Muslims include public floggings.

“At a time when it is consolidating its democratic gains, we urge Indonesians to move forward – not backwards – on human rights and resist attempts to introduce new forms of discrimination in law,” continued Zeid.

“LGBTI Indonesians already face increasing stigma, threats and intimidation. The hateful rhetoric against this community that is being cultivated seemingly for cynical political purposes will only deepen their suffering and create unnecessary divisions.

“If we expect not to be discriminated against on the basis of our religious beliefs, colour, race or gender, if Muslim societies expect others to fight against Islamophobia, we should be prepared to end discrimination at home too,” said Zeid.

Over the last two to three years Indonesia has dramatically reversed its past general tolerance towards the LGBT community. LGBT people are now routinely discriminated against, abused and arrested, often under the country’s anti-pornography laws.

Emboldened morality police are increasingly raiding private residences and businesses, while the government has moved to censor LGBT expression and representation in all media – including blocking LGBT dating apps.

Late last month, police raided several beauty salons in Aceh province and arrested a number of transgender women. They were publicly humiliated and assaulted and forced to cut their hair and to wear men’s clothing.