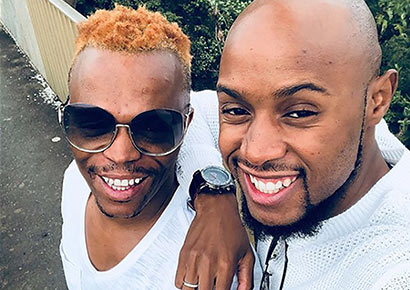 Somizi Mhlongo has revealed that he has gotten engaged to boyfriend Mohale Tebogo Motaung in the city of love. And it was the star who popped the question.

On Monday, the 45-year-old choreographer, socialite and Idols South Africa judge posted a video on Instagram of the diamond ring with the comment: “It’s a Big YESSSSS. it’s a golden ticket.”

Mohale in turn also shared an image of the ring on his hand, proclaiming: “I SAID YES !!! Yes, I am getting married”.

The men got engaged during a romantic trip to Paris, Somizi confirmed to Metro FM. “It was on the ‘love lock’ bridge with the Eiffel Tower behind us. I’ve watched too many movies obviously,” he said.

Somizi said he planned to tie the knot soon. “I’m not a long time engager. I’m not talking about getting engaged seven years ago. It must be within a year-ish.”

The lovebirds, who’ve been dating for about a year, posted a host of glamorous pictures of their Parisian experience on social media earlier this month.

Mohale is a 24-year-old Wits student who has his sights on becoming an economist.

Somizi is one of the most high-profile LGBT celebrities in South Africa. An actor, presenter, choreographer and reality TV star, he hosted the 2005 talk show Intimate Connexionz as his drag alter ego Madame Gigi.

He has also appeared in movies such as Sarafina and Cry the Beloved Country and was an immediate hit as an Idols South Africa judge when he joined the panel in 2015. Last year Somizi released his best-selling biography, Dominoes: Unbreakable Spirit.