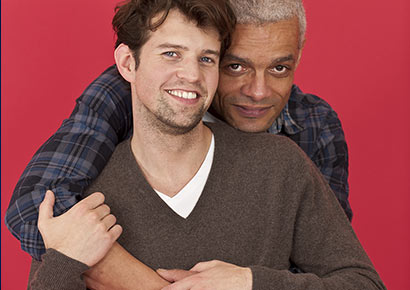 Are you having sex when all you need is to be touched? asks Bruce J. Little.

The problem is that society has somehow convinced many of us that men do not need to be touched or can’t be trusted to touch or be touched in a non-sexual way. This has become even more complex for gay, bisexual or queer men to navigate. A man touching another man with affection has been labelled as ‘gay’ and now straight, and gay men alike suffer from this ignorant way of thinking because we are creating a society of men who are suffering from touch isolation.

Homophobia has created many a society that frowns upon contact between men, for fear that this contact and intimacy could spark homosexual inclinations. This has left millions of straight men also starved for affection and intimacy from their fathers, brothers and male friends. With gay men, these interactions become even more sexually-loaded.

Touching someone means so much these days. Holding another man’s hand has a much more dramatic effect now than it did say 100 years ago. In rural areas around, South Africa it is still commonplace to see two men walking hand-in-hand, but in most urban or densely populated metro places in South Africa, this gesture has come to be seen as being synonymous with homosexuality.

Holding another man’s hand means you are having sex with him. How did we get here? In a world were so many fathers are already holding back on showing their sons affection, gay boys are presumably receiving even less affirming touch from their dads.

As a gay guy, I am highly conscious of which men I touch and how I touch them, as well as super aware of the types of touch that I receive from other men. I’m very lucky. As a gay man with a fantastic relationship with my father and brother, I enjoy regular hugs and the odd hand on the back of my neck and shoulder. It means the world to me.

I also have a group of gay men that I have platonic relationships with that I get to regularly embrace and spend time with intimately in a non-sexual way. The problem is that I am the exception and not the rule. A lot of men don’t have these opportunities to be touched in an affectionate platonic way.

There were times in my past where I also went for weeks without being touched by another person, and I could actually feel the lack of that intimacy. I knew that there was something significant missing from my life. It hurt, and I felt even more alone in the world.

Sex is fantastic, but it may not be what you really need right now.

With hookup apps as prevalent as they are these days, it’s easy to find someone in a 5 km radius to meet up for sex, but I wonder how many of these hookups are motivated by the regular need to get your rocks off, and how many are actually just triggered by a conscious or subconscious need to be touched.

Would we be as promiscuous as a community if we were touched more often?

This is not about stigmatising or criticising promiscuity. Promiscuity is basically defined as having sex with multiple partners, and there is nothing wrong with consenting adults engaging in this behaviour responsibly with one another.

“Slut-shaming” is harmful and feeds the stigma monster that directly and indirectly causes so much harm to the LGBTQ+ community. However, isolation, depression and insecurity have been linked to risky sexual behaviour (unprotected sex with new acquaintances, for example) and this is adding to the burden of HIV infection, as well as the spread of other STIs among us.

So, make sure you top up on good and healthy man-touch when you can. Book yourself a regular massage with a guy that you trust or get a haircut or join a contact sport with other guys. Let another man lay his hands on you in a healthy and affirming way. Sex is fantastic, but it may not be what you really need right now.

Therapist and author, Dr Seth Myers, advises that if you are going to engage in casual sex, “The goal is to make sure that you feel good about who you are after the interlude is over.” Who knows, you may even be preventing yourself from being in a risky situation just because you needed a hug.

The below powerful video from Scotland about homophobia has gone viral because it so accurately depicts the challenges around touch between two men.