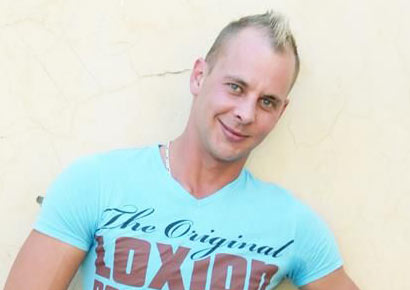 A man was set to appear in the Welkom Magistrates’ Court on Wednesday on a charge of assaulting a gay Free State man because of his sexuality.

On 11 April, 32-year-old Divan Cross, his partner of three years, and a group of friends went to a local pub for their weekly karaoke night out.

“We were about 16 friends, all LGBTI people, sharing a long table, singing karaoke and having fun. We are all well known in this pub and also close friends with the pub owners,” Cross told Mambaonline.

As closing time approached, around 01:45, the bartender asked the group to settle their bill. While his partner went to the car to fetch his wallet, Cross walked towards the DJ to ask for one last song.

He came across two men blocking the passage, talking to one another. He stepped up onto a step and tapped one of the men on the shoulder and asked to be let past.

“I simply said, ‘sorry, can I pass?’ The next moment I went flying through the air and after a moment I woke up on the floor,” said Cross.

“I was in total shock. After he pushed me off the stairs he simply turned around and talked to his friends. He showed no remorse or emotions.”

Cross added: “I never spoke to him [before] the attack or touched him until that very moment when I wanted to pass him to go to the DJ.” 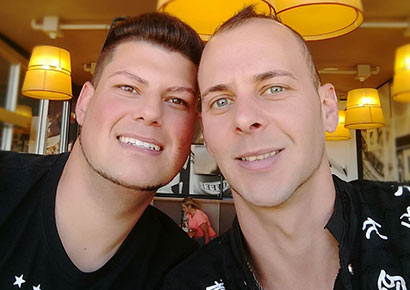 Cross and his partner, Jaco (left)

CCTV footage of the incident (see below) shows the man, seemingly for no reason, turning around and violently shoving Cross off the step and onto the floor.

Cross, a hotel manager, alleges that after his partner confronted the man as to why he attacked him, the couple were threatened with being beaten.

Cross went on to post the CCTV footage on Facebook and asked for help identifying his alleged attacker. Within minutes he was supplied with a name and he opened a case of assault.

He firmly believes that the incident was motivated by homophobia and that his alleged attacker had been mocking him and his friends.

“On the video… they were pointing in my direction, then he spoke to his friend, acted as if he was kissing him, and flapped his hand…” said Cross.

“I was never really afraid of being gay, going out or being bashed anywhere in Welkom. This is a huge eye-opener, I never expected this to happen to me… to us.”

Cross said that he suffered injuries to his arm, jaw, back, neck and hip. Perhaps longer lasting are the emotional impact and trauma.

“At first I thought I was doing okay, although I didn’t sleep much. Then three days later I went to the shop alone, and I saw some big men. I had an anxiety attack, ran out and locked myself in the car.”

Since then he fears going out alone, and suffers from tremors, chills, rapid heartbeat, headaches, difficulty concentrating, sleep disturbances and anxiety. “I cry easily and have withdrawn myself socially,” he said. 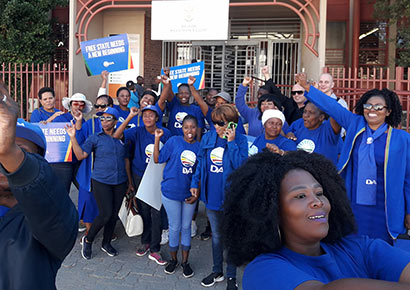 Supporters outside the Welkom Magistrates’ Court

“My partner and I were part of the committee of the very first Gayweesfees that was held last year in Welkom, I also hosted the very first Mr & Miss Diversity in 2016 and I’m a proud gay man. I want justice to be served. No one has the right to assault anyone, no matter their differences,” Cross said.

On Wednesday, a group of supporters gathered outside the Welkom Magistrates’ Court, led by the DA Women’s Network (DAWN).

“We condemn all the incidents of discrimination against gays and lesbians,” said DAWN Free State Chairperson, Deliwe Mvala-Majola. “They are our brothers and sisters, they are our kids, they don’t need to be discriminated against.”

She added: “We sympathise with Divan and we are saying that this must never happen again. It needs to stop now.”

The case was postponed to 31 May.