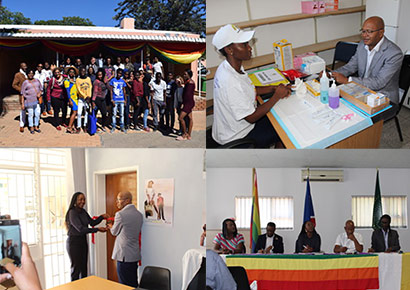 For the first time, Namibia’s LGBT community will have access to a dedicated health and services centre.

The Outreach Health drop-in-centre was launched by Out-Right Namibia (ORN) in Windhoek on 17 May, the international Day Against Homophobia, Transphobia and Biphobia.

“It is a first,” ORN Director Friedel Dausab told Mambaonline. “It is for all LGBT, and we are also trying to open it to include other sexual and gender minorities, just to really give people a safe space where they can come for heath services, including mental health and sexual and reproductive health services.”

In addition to members of the LGBT community, the historic opening was attended by officials from partner organisations such as Wings To Transcend Namibia, LifeLine ChildLine Namibia, the United Nations Population Fund and the Namibia Planned Parenthood Association.

The services on offer will include HIV testing and counselling as well as the provision of PrEP (a daily HIV prevention pill) and HIV treatment, right at the point of diagnosis. “This is something that is really needed in the community,” Dausab noted, “where people need safe services.”

The intention is to also start offering legal assistance to the LGBT community at the centre. This could entail “legal advice, listening to people’s cases and taking on legal representation,” Dausab said.

“We are also stationing our outreach officers in the centre so that every case that comes in they can screen people for intimate partner violence, gender based violence and human rights violations. They can refer people to where they need to be to get assistance.”

Dausab explained that the opening of the centre is part of a larger strategy to push for equality in Namibia, including decriminalising homosexuality. By collating and documenting people’s experiences of discrimination, ORN hopes to use these stories as evidence for lawmakers and other leaders to illustrate the real human impact of LGBT oppression and stigma.

Some of these cases may also be taken to the courts to begin to incrementally challenge discriminatory legislation. “This may mean someone who has been refused health service somewhere at a public clinic or a private centre. It could mean intimate partner violence, where the person is unable to report to the police because our domestic violence laws specifically say that same-sex relationships are not domestic relationships.”

Dausab added: “This small centre is meant to contribute to the bigger idea of equality for all LGBT in the country.”

Under colonial era laws, consensual “sodomy” is illegal in Namibia and could be used to prosecute gay men, although this is not believed to have happened since the country’s independence in 1990.