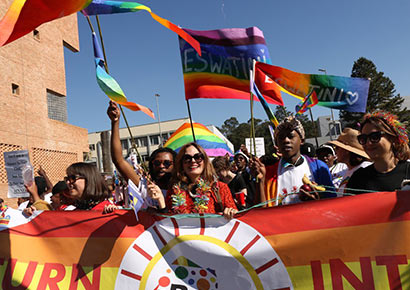 Closing off International Pride Month, the kingdom of eSwatini (formerly Swaziland) hosted its first LGBTQ pride march – and thousands came out to support the historic event.

Organiser Melusi Simelane, from Rock of Hope, said he was beyond thrilled with the number of people who attended the parade. “We weren’t expecting so many people. The stadium was so full. We had more than the 2,000 people we had expected,” he told Mambaonline.

The event took place in the country’s capital city, Mbabane. The pride kicked off with a march around the Prince of Wales Stadium, with police escorting the attendees. A picnic followed the procession with stage entertainment and an after party.

Eswatini Pride aimed to create a safe space for the LGBTQ community so they could embrace who they are, and to also elevate LGBTQ visibility among the country’s wider community. “The event went well, it was perfect,” Simelane exclaimed.

Speaking on how the pride was received, Simelane commented that the reporting of the event by the local media was “quite beautiful” and the public reacted positively to the parade. “We have not yet heard of any backlash from people about the event,” he added. The march was featured on the front cover of Sunday newspapers, alongside generally positive reports. 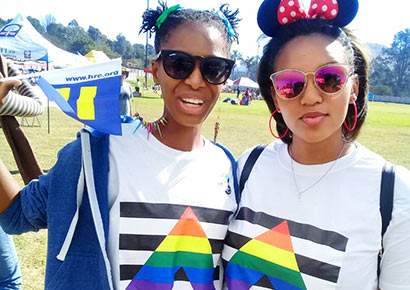 The US Ambassador to eSwatini, Lisa Peterson, was among those who led the parade. “We are thrilled to see this happening today,” she told AFP. “Just to refer you to the words spoken by Martin Luther King Jr that ‘injustice anywhere is a threat to justice everywhere.’ Some are afraid to come into the open because they are afraid of these acts of injustice. We are here to make justice for all.”

Representatives from international activist group All Out, which helped the organisers raise funds for the pride, also attended the march. Executive Director Matt Beard praised those around the world who had contributed, as well LGBTQ Swazis themselves. “You have shown the world that love always wins. You have made history. Our pride in you is overwhelming,” he said in a blog post.

Simelane hopes the success of the pride will affirm to the country’s LGBTQ community that they are not alone. “We hoped that we showed the community that there are people who love us. Our existence is our uniqueness,” he said. 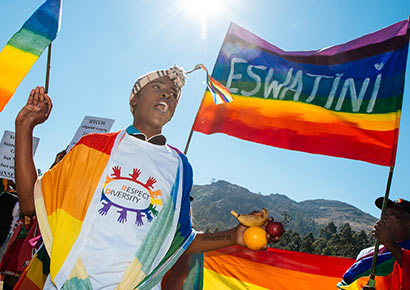 LGBTQ Swazis continue to face discrimination, with no protection specified in the constitution. There are also common law offences such as that of sodomy, and citizens “suspected” of the act can be arrested without warrant under the Criminal Procedures Act of 1938.

Rock of Hope said it was looking forward to further support from within and outside the country, noting that, “This is not the end of advocacy.” The group has also called for people to take the initiative in learning more about the LGBTQ community in eSwatini.

In April, the country’s name was officially changed by King Mswati III, one of the world’s few absolute monarchs, from Swaziland to the Kingdom of eSwatini.

Swaziland Pride made the front page on both national newspapers on Sunday. The press, that had been mostly critical of the Pride before, reported positively and showed lots of photos from the march. Changing hearts and minds! #eSwatiniPride #SwazilandPride #Pride pic.twitter.com/CgfGIqUSEu

Speaking on how the event was received by the general public, Simelane said the reporting of the event was “quite beautiful” and the larger public reacted positively to the parade. “We have not yet heard of any backlash from people about the event,” he added.

The pride parade event took place at the country’s capital city, Mbabane, at the Prince of Wales Stadium.

The first Swaziland Pride is over and it was a HUGE success! The community and their allies painted the streets of this country rainbow, with a beautiful, colourful parade that was literally exploding with joy. #eSwatiniPride #SwazilandPride pic.twitter.com/w2Wl2UGeCp

Simelane said he hoped the success of the pride restored affirmation to the country’s LGBT community that they are not alone. “We hoped that we showed the community that there are people who love us. Our existence is our uniqueness,”he said.  The country’s LGBT community still faces exclusion from its constitution. There are also common law offences such as the offence of sodomy; citizens “suspected” of the act can be arrested without warrant under the Criminal Procedures Act of 1938.

Guys what a day. What a turn out. Mbabane skies with pride flags – never thought I’d see the day. #eSwatiniPride pic.twitter.com/19SYABRmSa

Rock of Hope said it was looking forward to the support it will now receive from within and outside the country. “This is not the end of advocacy.” They have also called for more people to take initiative in learning more about the LGBT community in eSwatini.