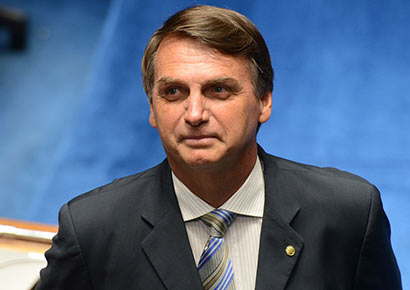 Human rights groups are calling for Brazil’s newly elected right-wing president Jair Bolsonaro to respect the rights of LGBTQ people and other minorities.

Bolsonaro, who has been described by some as a neo-fascist, received over 55% of the vote in Sunday’s election.

Bolsonaro’s promise to take Brazil out of its economic slump and tackle endemic corruption has resonated with many voters, despite his hate speech attacks on minorities and support for autocratic rule, state torture and restricting the media.

The country has the highest murder rate of LGBTQ people in the world, with 387 killings in 2017. Initial reports suggest that the 2018 LGBTQ murder rate will be considerably higher.

Activists fear that Bolsonaro’s open homophobia is already fueling violence against LGBTQ people. In recent weeks there have been a number of alarming incidents.

Earlier this month, thugs beat transgender singer Julyanna Barbosa in Nova Iguaçu with an iron bar. They allegedly stated: “I hope Bolsonaro wins to kill this piece of trash.” Also this month, another transgender woman was stabbed to death during an argument in São Paulo by men who shouted Bolsonaro´s name. There have further been reports of football fans chanting “Bolsonaro will kill all queers” during matches.

“It’s as if the gates of hell have been opened – as if hunting season had been declared,” Beto de Jesus, veteran LGBT activist and founder of São Paulo Pride told The Guardian. “It’s barbarism.”

In 2002, Bolsonaro, a former soldier, said: “If I see two men kissing each other in the street, I’ll whack them.” In 2011, he commented that, “I would be incapable of loving a gay son,” adding that he would, “rather my son died in an accident than showed up with some bloke with a moustache.”

Bolsonaro has equated homosexuality to pedophilia and suggested that most homosexuals who are murdered are sex workers and not worthy of protection through legislation. He has also said the state should not pay for anti-retroviral drugs for people living with HIV.

“Brazil’s public institutions must take firm and decisive action to protect human rights and all those who defend and mobilize for rights in the country,” Guevara-Rosas said. “The international community will remain vigilant in holding the Brazilian state to its obligations to protect and guarantee human rights.”

“Brazil has independent judges, committed prosecutors and public defenders, courageous reporters, and a vibrant civil society,” said Vivanco. “We will join them in standing up against any attempt to erode the democratic rights and institutions that Brazil has painstakingly built in the last three decades.”