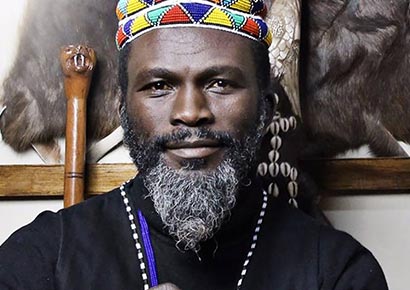 Bishop Joshua Maponga, a Seventh Day Adventist preacher and motivational speaker, has been accused by a church member of violating the dignity of gay people by equating them to dogs.

Maponga is set to appear in the Port Elizabeth Magistrate’s Court, sitting as the Equality Court, on 19 November on charges of homophobic hate speech.

Zolani Simayi, a lecturer at the University of Limpopo, initiated the case after he saw a video of Maponga preaching at a memorial service in January. The clip was posted on a WhatsApp group of church members.

Maponga is described online as “a motivational speaker, social entrepreneur, philosopher, musician and leader with a keen passion for community development.” He has written a book, appeared regularly on TV and speaks at high profile events.

In the video, filmed at the KwaMangxaki church in Port Elizabeth, Maponga refers to the Bible and talks about the “lustfulness of the Gentiles”.

“In Chapter One Romans we learn about homosexuality – we learn about animalistic behaviours,” he says. “In one sentence, when human beings are left to themselves without God, they reduce themselves to the level below the animals.” Maponga then appears to compare homosexuality to “two dogs that are playing together, two male dogs…”

Simayi, who calls himself a human rights activist, told MambaOnline that when he listened to the clip, he “was uncomfortable with how he [Maponga] addressed the issue of human sexuality,” believing that it was “demeaning to gay people.” He added that, “as much as we go to the same church, I don’t agree with the sentiments of the sermon.”

Harassed and bullied by members of the church

Simayi brought up his concerns on the WhatsApp group and wrote an open letter to engage Maponga on Facebook. He says, instead of a healthy public debate on human rights (free speech versus right to dignity), he was flooded with insults. “No one engaged with the facts but rather kept manifesting religious intolerance. With some saying gays are like witches, they must be burned,” said Simayi.

“After realising that I will not achieve my goal of an open public discourse on sexual orientation and human rights,” he decided to file a complaint with the SA Human Rights Commission (SAHRC). He believes that Maponga violated the right to dignity of gay people and contravened the Promotion of Equality and Prevention of Unfair Discrimination Act.

Simayi claims that after he laid the complaint he was harassed and bullied by members of the church in an attempt to convince him to withdraw the case. Simayi has refused to do so and criticised those who are more concerned about the reputation of the church than equality and justice. “I want him to issue a public apology not to me but to the people he dehumanised,” said Simayi.

He sent MambaOnline social media screenshots in which Maponga appeared to say that, as per Biblical passages in Leviticus, gay people should be executed, and equated homosexuals to smokers, adulterers, and pedophiles. He also derided the “arrogance of the West” for forcing “their will” on other countries, such as Malawi and Uganda, with regard to LGBTQ rights. He further suggested that human rights are one of the doctrines of the devil.

Maponga did eventually submit a letter of apology to the SAHRC, in which he admitted he’d “argued homosexual relations to be unnatural” in the sermon, and that “it was unfortunate that I used the illustration of ‘dogs’ to make the point about this Bible text.”

He said he was “sorry for the pain caused and I understand the seriousness of the issue of the right to be treated with dignity and the preaching of the gospel without dehumanising other people.” Maponga also regretted that “the debate started at a public forum, on social media, leading to families and the public getting involved.”

Standing up for the rights of others

Simayi, however, has refused to accept the apology and will continue to pursue the case. In a letter to the SAHRC he described the apology as “a face-saving exercise” and insisted that Maponga “must be held accountable for his words.”

“Bishop Maponga is a man of authority and his influence goes very far,” said Simayi. “Because of that, whatever he says, the public takes it seriously. His message that dogs are not as confused as gays will have serious implications.”

Simayi wants Maponga to issue an unconditional public apology, enforced by the court, acknowledging the “homophobic nature and unconstitutionality of his words,” and to refrain from making similar statements. He should also be ordered to do community work with an LGBTIQ advocacy group and to urge his social media followers to “desist using his sermon to propagate hatred towards members of the LGBTIQ community.”

Simayi said that Maponga has insinuated that he [Simayi] is gay (which he claims has led to other church members mocking his sexuality). It’s something he wants to refute in order to make an important point: “I do not need to be gay in order to raise issues of homosexuality. I am not gay but a simple human being who is standing up for the rights of others who are bullied in the society.”

Simayi has urged members of the LGBTIQ community and fellow progressive citizens (Christians and non-Christians) to show their support for the case on 19 November at the Port Elizabeth Magistrate’s Court, Court 52.

MambaOnline messaged Maponga on Facebook and sent him an email asking for comment but has not yet received a response.