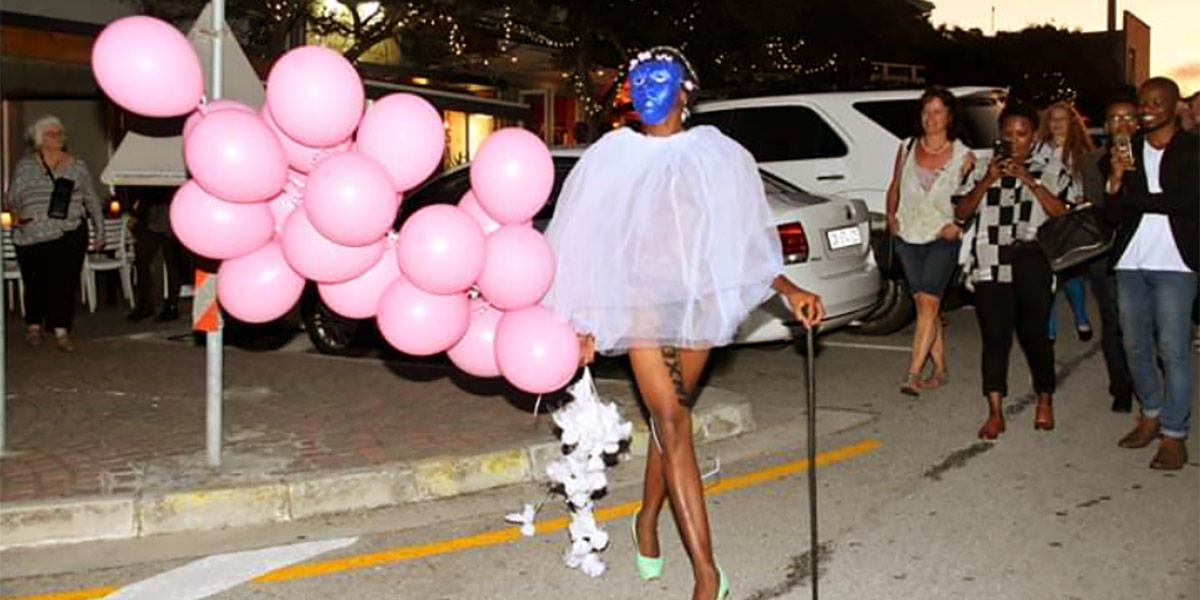 Gay artist Bongani Njalo stunned members of the public in Port Elizabeth last month when he performed his provocative piece Abafana Abafani (‘boys are not the same’) on the city’s Stanley Street.

Wearing little more than a g-string, a blue mask and high heels, and holding a festival of pink balloons, he sought to make a statement about homophobia, masculinity and the stifling and censoring of the film Inxeba. Port Elizabeth, the largest city in the Eastern Cape, was an apt location for the work; the controversial film was set in the same province; said to be the most homophobic in the country.

Inxeba told a tragic love story within the context of the secretive Xhosa rite of passage to manhood. Its release led to protests, threats of violence and canceled screenings, especially in the Eastern Cape, and a bid by traditional leaders to effectively ban it. This was overturned by the courts but only for viewers over the age of 18.

MambaOnline spoke to Njalo about his work, his thoughts on Inxeba and the intention behind his performance piece.

What kind of effect did Inxeba have on you? Was it something you connected with?

The movie resonated with me on many levels. I can think of very few movies that have made it to the big screen in which my mother tongue is spoken eloquently from start to finish. That made me proud and put less distance between myself, the characters and the content. I could identify with many of the characters too, from personal experience and almost felt like I’d met them at different stages in my life. I was closeted at the time of my transition into manhood, unlike the character Kwanda. The young initiate is in stark contrast to who I was then. I found the superimposition of culture and sexuality quite interesting as I’d never considered initiation school as an intersectional space. The movie was a huge eye opener not only for me but also my heterosexual friends and their understanding of male sexuality.

You’ve said that your reaction to the trailer was that you initially saw it as an attack on your Xhosa culture.

At first I was ignorant and then I chose to overcome my ignorance by seeing the movie because we all evolve by choosing to engage or confront the things that bring us fear, disgust or hatred. I chose to see the movie not because I was curious, but because I wanted to understand why I hated it so much from the onset. As human beings we cannot escape the world of emotions and my mind was changed about the movie when I saw the characters as people who had genuine feelings, like you and me.

Do you think that much of the criticism of Inexeba was from those who had not actually seen it?

Most definitely! I watched the movie with my brother who is heterosexual and who also had reservations about the the movie. At the end of it, we were both trying to get our very traditional folks and other heterosexual men to see it because of the many lessons it has for everyone. The movie is an opportunity for us to learn about ourselves (as Xhosa people) and those around us (within the community). 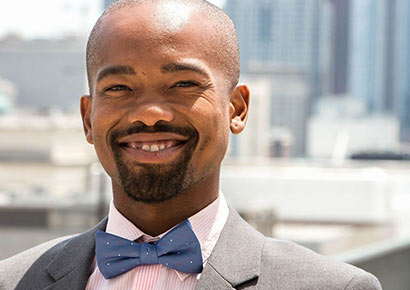 How did you feel when cinemas showing Inxeba in Port Elizabeth and East London were forced to shut down screenings?

I felt very scared. I was scared to say anything on social media about it and practically scared to leave the house as an openly gay man because people were literally making death threats.

The film is technically no longer banned (for those over 18, at least) but do you feel that it is still effectively banned in the province?

Absolutely! As far as I know, the movie has only been screened for private audiences here and not on mainstream circuits – I could be wrong. But if that doesn’t scream censorship then I don’t know what does.

With this piece, I wanted to address and celebrate the importance of individuality. Masculinity is seen and constructed as having a singular expression within the context of culture which I believe is incorrect. I wanted to remind people that it has not always been this way and that colonialism has had its effect on how we as African men dress and engage with one another and with women too. The expression of masculinity in pre-colonial Africa is far more diverse than what it is today and it is through our understanding of history that we will be able to (re)build an Africa that makes sense for the modern world.

Homophobia and ideas around what it means to be a man seem to be intrinsically intertwined in South Africa. Do you agree with that statement?

No, I don’t agree with that. Homophobia is not a South African problem and it shows its ugly head wherever it feels comfortable because it sees vulnerability in feminine-embracing men as an attack on masculinity and the long-standing systems of patriarchy within society. I say this because I was on the receiving end of my first homophobic attack in the United States in 2017 and it was dished out to me by a group of young African-Americans on their home soil. Homophobia has falsely attached itself to masculinity and what is means to be a man. I think masculinity is complex and has room for vulnerability, tenderness and compassion. South Africans aren’t lazy; people are willing to learn and unlearn certain behaviours provided that they are also heard because they are just scared in most instances.

According to the SA Institute of Race Relations, the Eastern Cape is the most homophobic region of South Africa. Do you agree with that assessment?

Not entirely. I think we firstly need to understand that homophobia has extremes and that some people are just misplaced conservatives who don’t truly understand themselves let alone their phobias. I think the Eastern Cape is a conservative province that requires one to be cautious because there’s “small town mentality” almost everywhere you go here which more often than not is a result of people just not being exposed to diversity. I’m lucky to have been born in the Eastern Cape but have lived in three other provinces in my adult life as an openly gay man. In Khayelitsha in Cape Town, where I lived with my ex-boyfriend, I was exposed to a surprising amount of homophobia even though Cape Town is the most gay-friendly city on the continent! In Soweto in Johannesburg, I walked freely hand-in-hand with my previous lovers through the streets and in taverns. In Bloemfontein I was overwhelmed by the large number of gay people who loved freely and unapologetically but homophobia existed there too. I think it’s all situational. 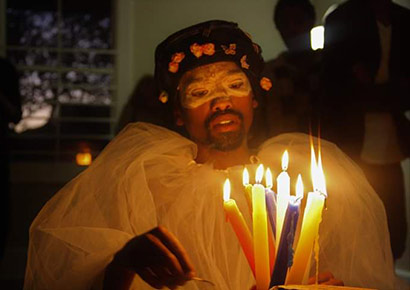 Why do you think that traditional leaders are so threatened by queer lives and identities?

Because they themselves refuse to modernise culture which is in a perpetual state of evolution. If I were a cultural leader, I would want my culture to remain relevant and to take pride of place for as long as possible and the only way to achieve that is to engage with young people about their problems and ambitions socially and otherwise. I think the culture has remained stagnant simply because the old dogs don’t want to learn new tricks. I’m a proud Xhosa man but I don’t understand why our cultural leaders don’t want to openly admit that African spirituality has always embraced the duality of certain people who are both masculine and feminine. Our traditional healers are also often bisexual or gay and that is an accepted norm as many of my friends are sangomas and respected leaders so there’s a disconnect that we need to address within our community.

The heels did all the work really, I just showed up…

Your background is in stained glass. This project is quite different…

Yes, I am trained as a glass artist but I haven’t touched glass in almost a decade purely because it is an expensive practice that I can’t sustain and secondly because my grandmother taught me traditional Xhosa bead work. It is pretty much the same thing because the beads are all glass. I use glass beads as a drawing tool and sew individual beads into paper to create very detailed drawings. An artist needs to pick up other languages as he grows and I have found that performance is a language I am comfortable using too.

Abafana Abafani could be seen as quite confrontational in the context of engaging with the public in the street. Was that something you felt was important?

Yes, because my own freedom as a gay man and an artist whose rights were infringed by the banning of the movie Inxeba, which was quite an assault creatively. Art is supposed to make the comfortable uncomfortable isn’t it? I wanted to walk down Stanley Street because it’s a street that is lined with restaurants and I knew that people would be having their dinner around 7pm when I started. It’s not everyday you get to see a black man wearing a g-string and high heels on a Wednesday night [and] neither does the Eastern Cape produce and export many movies that become global successes overnight. 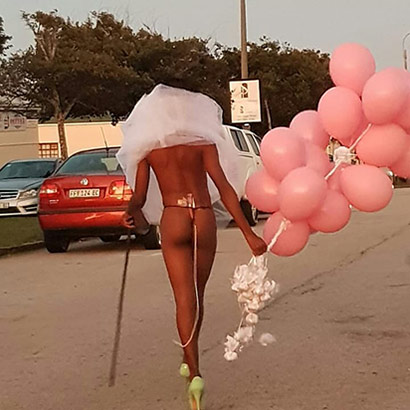 How did people respond to the piece? Was there any negativity?

I had many positive responses because I think the Eastern Cape is hungry for more work like this – work that is daring and in your face. Most people thanked me for it and the boys at the corner bar really liked my legs and they cheered me on and whistled… until they realised I’m a dude. The heels did all the work really, I just showed up.

Do you have hope that change is coming?

I know for a fact that change is coming because someone is going to read this article and think about the things I’ve said. Those thoughts will have a ripple effect in conversations over the dinner table and at the bus stop and taxi ranks. People talking amongst themselves about a burning issue, agreeing, disagreeing and compromising their backward beliefs. Change is coming and it’s on a global scale.