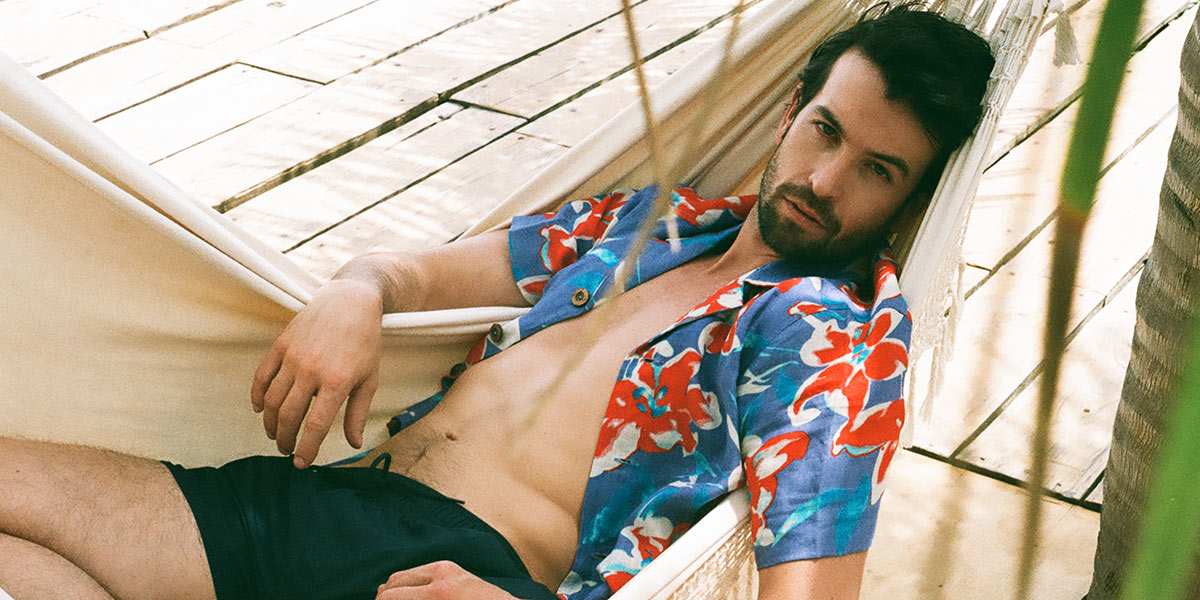 South African actor Armand Aucamp, known for his roles on TV, the big screen and the stage, recently came out as a gay man in the pages of Rapport.

It’s a new chapter for the 32-year-old, who is especially popular in the Afrikaans community for starring in the likes of Sterlopers, Ballade vir ‘n Enkeling and Die Boekklub. Armand has also appeared in many English and international feature films and stage productions.

His coming out follows the launch of a new career as a cook; publishing a low-carb cookbook, Armand Kook Kaal (Cooking Naked with Armand), which has since evolved into a cooking show on Afrikaans lifestyle channel, VIA.

While his sexuality was known in the entertainment industry and among family and friends, he has only now come out to the public. In an interview with MambaOnline, Armand opened up about his sexuality, living in the closet as a celebrity and coming to terms with his true self.

Often, coming out to ourselves is our biggest challenge. What was your personal journey like?

It was difficult. I was very good at denial. I knew from early, early on, but as soon as that thought would enter my mind, I squashed it within seconds. At one point, somewhere around 22, I even accepted that I will remain a bachelor for good rather than come out. And then I met someone who broke all my preconceived ideas about homosexuality, someone who just was…who happened to be gay. And who happened to like me. We are so preconditioned to place others and ourselves in boxes and even if I, momentarily, allowed myself to accept that I was gay, I didn’t necessarily fit into the ‘gay’ box either – whatever that is. But that was my idea at the time. 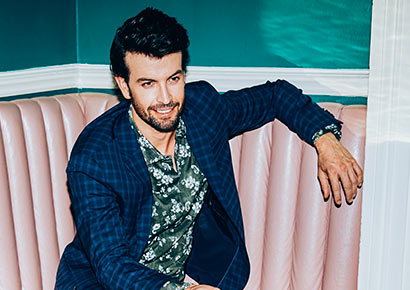 Tell us about when you first came out to your inner circle?

Boxing Day 2011, at age 24. I came out completely, to friends, family and colleagues – it was even on Facebook. At that point, I was doing a lot of theatre work in Cape Town and my local TV and film career had not yet taken off. I was in a relationship and a year later, it ended. At the same time, I started getting really high-profile work. Being single, I did not have to address my sexuality – convenient because I was also playing (straight) romantic leads, which made things a little more complicated. Slowly, I started avoiding talking about it, even though I was still ‘out’.

And why did you decide to come out to the rest of the world now?

I met my incredible partner about a year ago, who held up a mirror up to me and I saw how much I was still hiding. I didn’t like what I saw. My career is extremely important to me, and I absolutely adore what I do, but I must LIVE first and foremost; to my full, authentic self. I have a lot of compassion and empathy for artists and public figures who are too afraid to come out, but the more we refrain from doing so, the longer it is going to take to make it acceptable. And what is worse, one loses valuable time to live FULLY.

What kind of response have you had, and what have you learned through the experience?

I’ve had incredible support from my followers and supporters; one hundred percent positivity from them. But, there is, unfortunately, a huge divide in opinion on [other platforms]. It saddens me that many people are so controlled by their own fears and prejudices; life is SO much lighter through acceptance. I wish that light for everyone! I feel very supported by some and very convicted and judged by others but the negative does not affect me at all. Really, as in zero! I have acceptance in abundance (especially from myself) and for that I am grateful. In the words of RuPaul, ‘I have not time to convert the haters. I am too busy loving the ones who love me already.’

Has your family fully accepted your sexuality?

I grew up in a home where we always challenged ideas and thoughts. They were accepting from day one and the initial reaction was to make sure I knew that I was and am loved. I must add though, that it took me 24 years to accept that I was gay. 24 years! I realised that I have to allow others to also get used to it too; to the new recalibrated, authentic ‘me’. I said and did things and pretended to be someone I was not completely and then, for them, overnight, that shifted. I think that many gay people are so exhausted of being closeted by the time that they come out, that it sometimes is a case of, ‘Well, I’m gay and that’s who I am and to hell with anyone who doesn’t like it.’ It’s a very aggressive energy which I totally understand; I was there myself – and sometimes still am – but we have to allow others to get used to the ’new’ us too. I gave myself 24 years; I can surely allow others some time too?

On Instagram you described being in the closet as a “mountain”. What did you meant by that?

It is a heaviness that is constantly with you… Something you can’t see, but feel. I guess it is a combination of fear, self-judgement, self-consciousness and sadness. I am not saying that being homosexual is any of those things at all, but my fear of being different, allowed me to make that ‘mountain’. And it stuck around for a long time. I guess a ‘mountain’ arises in any situation wherein one is not living their truth – any truth – for an extended period of time. And every time you don’t live it, it just grows. And to demolish it is as simple as being authentic, even though being authentically ourselves, is one of the most difficult things for us humans to do.

To what extent did you stay ‘in the closet’ out of fear of it affecting your career?

Yes, it is a total fear of losing work that kept me from talking about it – even though I felt a deep-seated need to do so. But I think that coming out is going to change me for the better [so] who is to say that it may not be the same for my career?

“Being gay is not private; it is part of who I am”

Were you ever afraid that your sexuality might be exposed in the media?

I used to be, that is why I never posted anything of my partner and I. But because I was already out in my personal life and work, I knew they all knew. I was not pretending to be straight in interviews or had ‘beards’, so there wasn’t all that much to write about really. But yes, I was afraid to be open about it. The questions around partners were always, ‘Do you have someone special in your life?’ as opposed to ‘Do you have a girlfriend?’ and I respect that kind of challenge to heteronormativity.

Do you think that coming out can be harder in some ways for someone in the public eye?

Yes definitely. People project a certain fantasy or reality onto you and that is fine, we all do it, but everything you do or say is open to so many more opinions and scrutiny. Also, your financial livelihood can depend on people’s attitude towards you. It really is very difficult. But as I said before, one has to LIVE first and foremost. 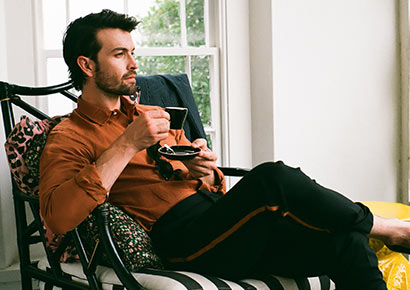 What about the idea that a person’s sexuality or who they are dating is a private issue?

When going through the motions of coming out, many people would try and dissuade me by saying things like, ‘It’s your personal, private life. What does that have to do with the public?’ I understand and appreciate their concern for me and what might happen to my career. It was my own excuse for years too. But being gay, however, is not private; it is part of who I am. Who I date and my personal relationships, those are private and I will share as much as I am comfortable with. But having said that, I am dating an incredible guy, Tannah – great name right? – who challenges me, grows with me and with whom I am extremely happy.

To what degree do you feel like you’ve been part of an LGBTQ community?

You know, being closeted on a public-level, I have never allowed myself to fully feel a part of the LGBTQ community; I have never even been to a Pride Parade… Having now come out publicly, I’d love to explore and get more involved within the community on some level. I am quite excited about it.

You’ve said you got into the banting lifestyle because you wanted to look good naked. Were you insecure about your looks before?

I wasn’t particularly insecure; I just knew I wanted to look a little better. Playing the ‘romantic lead’ often, one looks up to other actors on an international level and they always seem to be ripped beyond comprehension, so I really started setting specific goals for myself. I have enjoyed the journey to not only discover physical aesthetic, but the biochemistry and science behind keto/banting has been truly fascinating and has become a passion!

Do you think as gay men we are overly pressured to ‘look good’ by our own community?

Yes, I think there is this ‘ideal’ male physique that is everywhere, but heightened within the gay community – similar to what women experience when looking at the fashion industry. Holistic health should always be a goal, but I don’t believe that it has a specific aesthetic.

Did you ever expect to become a cookbook author? Do you see this becoming a whole other career for you?

It is not something I expected at all. I love to consume books, but never thought I’d contribute. But I absolutely love it and will definitely continue pursuing it. I will never leave acting or the film industry, but for so long I believed that that was all I was… an actor. We all are many things, so I love that I get to challenge myself and explore other creative outlets. 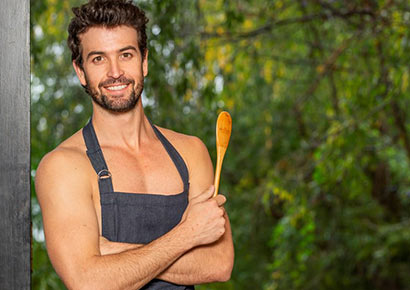 What’s been your most challenging acting role?

Ballade vir ’n Enkeling for sure. But challenging because of the expectation and pressure I put on myself. It is a story from 1980s that the whole Afrikaans culture was mad about and remaking it 27 years later was a huge task. I remember constantly trying to live up to the expectation and not ‘messing it up’. I was so in my head about it all the time. Luckily it was received extremely well and it really launched my career. I just wish I had enjoyed the process more at the time.

What’s next for Armand Aucamp? What projects are in the pipeline? And do they involve you getting naked?

They DO actually…I am playing a highly-sexed romance novelist for my first role in a soapie. I have put off doing soap because I wanted to explore different projects first; find myself as an actor in different roles. But now I feel that I’m ready to tackle this new challenge. I just seem to keep playing writers for some reason! Hopefully that trend will also continue for me personally as a cookbook writer as my publisher and I are already in talks for the next cookbook – with clothes ON this time…