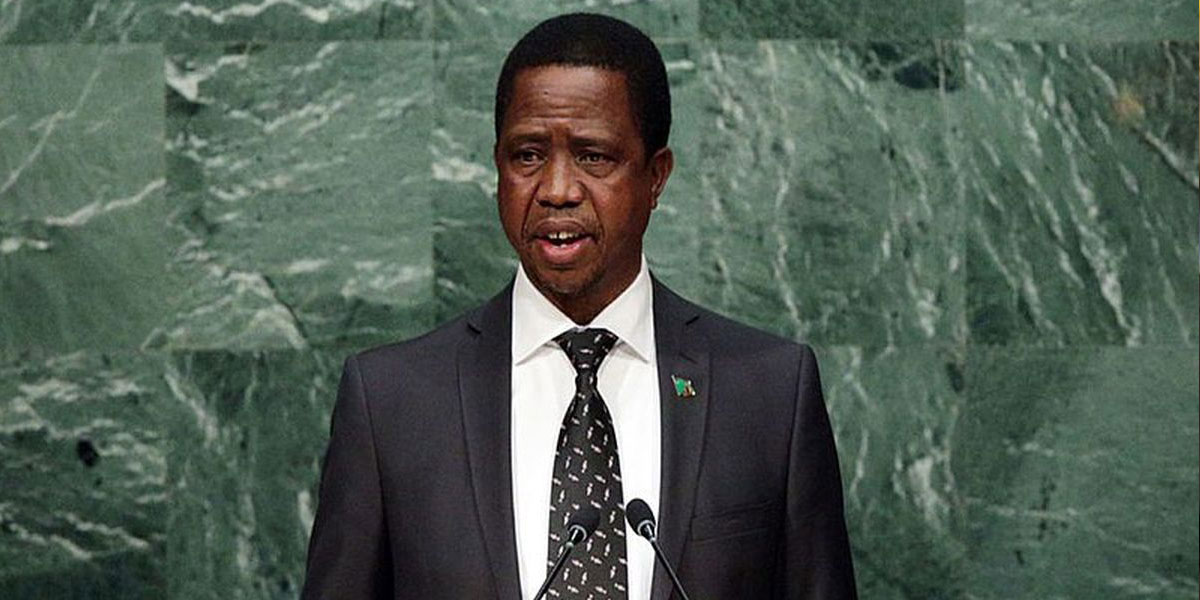 The homophobic president of Zambia and the US ambassador have exchanged angry words about the shocking sentencing of two men to 15 years in jail for homosexuality.

Last week, Japhet Chabata and Steven Samba’s 2018 prison sentence for having sex “against the order of nature” was upheld by the Lusaka High Court.

This prompted the US Ambassador to Zambia, Daniel Foote, to issue an unusually outspoken statement in which he said that he was “horrified” by the news.

“Decisions like this oppressive sentencing do untold damage to Zambia’s international reputation by demonstrating that human rights in Zambia [are] not a universal guarantee,” he wrote.

Foote also slated the government for failing to act against corruption and poaching while upholding a law allowing two adult men to be jailed for a consensual and private act.

Zambia’s government was infuriated by the ambassador speaking out on the issue and said it would lodge a formal complaint with Washington.

In an interview with Sky News, Zambian President Edgar Lungu slammed Foote for being disrespectful towards Zambian culture and values. He also fiercely defended the country’s criminalisation of homosexuality.

“We know that there could be people who are homosexual in Zambia but we don’t want to promote it,” Lungu said. “We frown on it… the practice… most of us think it’s wrong… it’s unbiblical and unchristian… and we don’t want it.”

The president also incorrectly claimed that “Even animals don’t do it,” despite same-sex sexual behaviour being documented in hundreds of species. “So why should we be forced to do it… because we want to be seen to be smart, to be seen to be civilised and advanced and so on.”

Lungu added: “If there are such countries which will allow bestiality, let them do it but not here.”

Foote wasn’t intimidated by the president and continued to condemn the men’s jailing, telling local media that he’d received death threats forcing him to cancel his participation in a World Aids Day event.

“I was shocked at the venom and hate directed at me and my country, largely in the name of ‘Christian’ values, by a small minority of Zambians. I thought, perhaps incorrectly, that Christianity meant trying to live like our Lord, Jesus Christ,” he said.

“I am not qualified to sermonise, but I cannot imagine Jesus would have used bestiality comparisons or referred to his fellow human beings as ‘dogs,’ or ‘worse than animals;’ allusions made repeatedly by your countrymen and women about homosexuals. Targeting and marginalising minorities, especially homosexuals, has been a warning signal of future atrocities by governments in many countries. In my heart, I know that real Zambian values don’t merit your country’s inclusion on that list, ever.”

Foote also appeared to subtly suggest that the country’s stance towards LGBTIQ people might lead the US to cut aid to Zambia.

“Zambia is one of the largest per-capita recipients of US assistance in the world, at $500 million each year. In these countries where we contribute resources, this includes partnering in areas of mutual interest, and holding the recipient government accountable for its responsibilities under this partnership.”

He added that “The current government of Zambia wants foreign diplomats to be compliant, with open pocketbooks and closed mouths.”

In addition to the criminalisation of homosexuality, the LGBTIQ community has few legal protections in Zambia. This year alone, at least four other individuals in two separate cases have been arrested on homosexuality charges.

The state has also recently cracked down on LGBTIQ expression. In June, South African media personality Somizi Mhlongo was banned from attending an event in Lusaka because he could “tear the country apart” and undermine its morals simply because he is openly gay.

In a statement, Pan Africa ILGA condemned the prosecution and sentencing of the gay couple, describing it as “a gross violation of privacy and by extension, an assault on the dignity of the parties” and a violation of the African Charter on Human and People’s Rights

“We join the international audience that is speaking against this miscarriage of justice. We call on Africans as well as the international human rights defenders, governments and relevant stakeholders to embolden the voice that decries the homophobic laws that are used to persecute queer Africans today,” said the organisation.