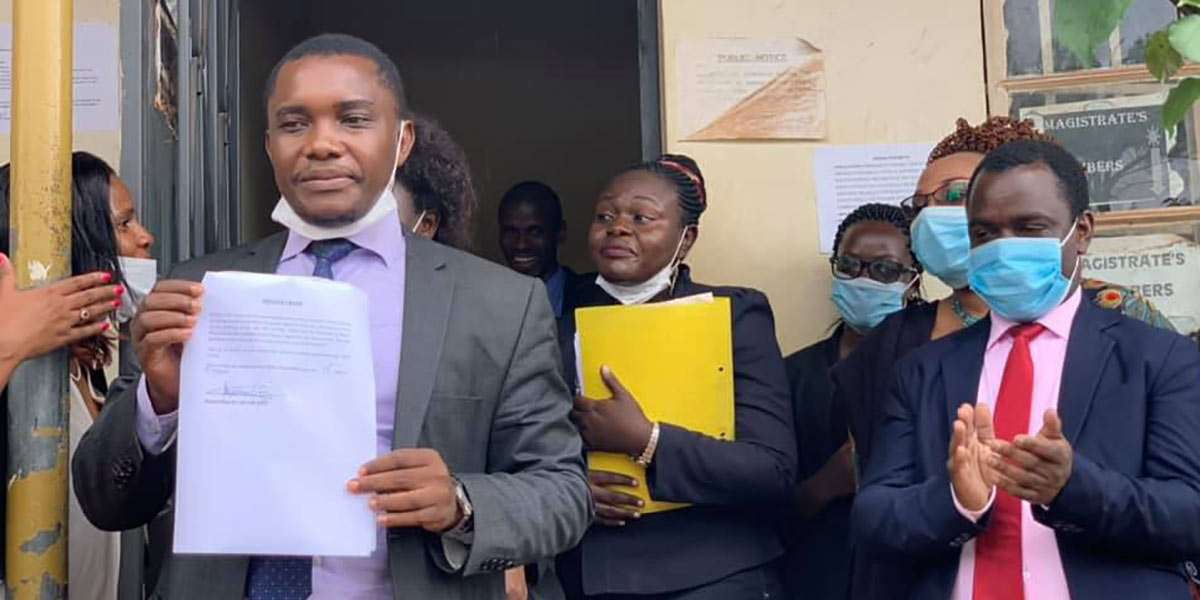 HRAPF Executive Director Adrian Jjuuko outside the Nsangi Court in Uganda after the group’s release in May (Pic: SMUG)

Nineteen gay men and trans women who were jailed for 49 days after a raid on an LGBTIQ homeless shelter in Uganda have been awarded damages for having their rights violated.

The individuals – who range in age from 19 to 32 – endured homophobic abuse during the raid and some were reportedly beaten by police. A search was conducted in the shelter to find “evidence” of homosexuality.

The authorities claimed that the raid was due to the individuals illegally gathering under the country’s coronavirus lockdown regulations but activists and their lawyers said this was an excuse to target LGBTIQ people.

After being denied access to their lawyers, purportedly because of Covid-19 restrictions, on 18 May, the individuals were finally released when all charges were dropped.

The High Court of Uganda has now ruled that the individuals were deprived of their rights to a fair hearing and liberty. The court also awarded damages of UGX 5,000,000 (about USD 1,340) to each of the accused.

The court found that the right to a fair hearing could not be waived even during the Covid-19 crisis since the right is “inalienable whatever the circumstances.” The court further ruled that denying the accused access to their lawyers for 40 days was “unreasonable and unjustifiable.”

The Human Rights Awareness and Promotion Forum (HRAPF) and Children of the Sun Foundation (COSF), which ran the homeless shelter, welcomed the 15 June decision.

“We applaud the Court for standing with us during this difficult period,” said Henry Mukiibi, the Executive Director of COSF and one of those arrested.

Dr Adrian Jjuuko, Executive Director of HRAPF, commented that “the fact that the judge did not dwell on the accused persons’ sexual orientation but rather addressed their rights as human beings is a breath of fresh air in Uganda’s LGBT rights related jurisprudence.”

Under colonial-era legislation criminalising gay sex in Uganda, those found guilty of homosexuality can face life in prison.