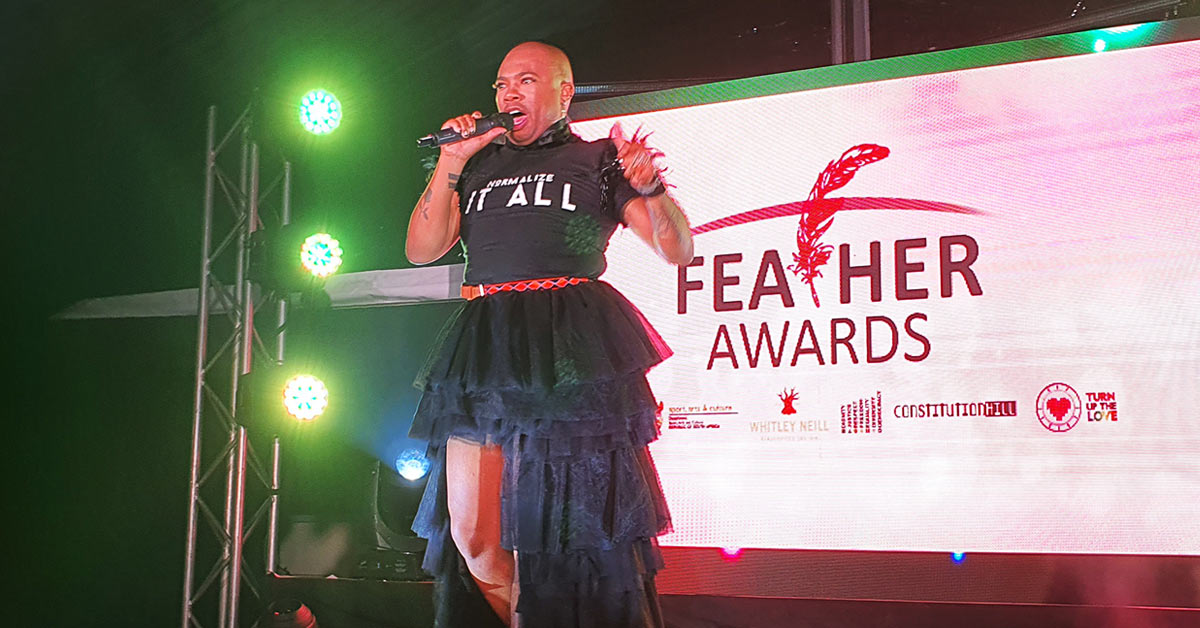 Thami Kotlolo opened the 2020 Feather Awards with a fiery speech

The 12th annual Feather Awards honoured a host of LGBTIQ+ achievers and allies on Wednesday, with co-founder Thami Kotlolo demanding that South Africans do better when it comes to queer inclusion.

Due to the impact of the pandemic, the ceremony – hosted at Constitution Hill in Johannesburg – was a scaled-down but no-less-glamourous edition, with guests and nominees decked out in their finest red-carpet outfits.

The event kicked off with a fiery speech from Kotlolo who called out government leaders for making promises to appease the community but not delivering real change. (In October, Kotlolo wrote a scathing open letter to Gauteng Premier David Makhura for failing to establish a long-promised LGBTIQ+ Desk.)

Kotlolo said that “representation matters” and asked why there is no visible LGBTIQ+ representation in the country’s leadership, calling for queer people to be represented across the board, from local government right up to the office of the president.

“Representation emboldens us as the queer community in our dreams and breaks mental and psychological barriers of what we thought was impossible and unachievable”.

He also criticised the government for failing to simplify the changing of gender markers for trans and gender non-conforming South Africans, for not offering preferential economic and housing opportunities to the queer community and for not providing truly LGBTIQ inclusive education to children.

Kotlolo further called on corporate South Africa to ensure LGBTIQ diversity, inclusivity and representation at the executive level and to take seriously the idea of LGBTIQ economic empowerment so that people of “diverse identities can thrive and flourish.”

He also questioned why medical aid schemes do not provide for the costs of transitioning or gender alignment, instead seeing these as “cosmetic” procedures.

And the 2020 Feather Awards winners are…

The event then moved on to celebrating the nominees and honouring the winners in each category, all under this year’s theme of ‘Turn Up the Love’.

Dapper-looking director, writer and actor Thishiwe Ziqubu took the Best Styled Individual while super suave digital and fitness entrepreneur Gorata Nzimande was presented with the Hunk of the Year award.

“As a young transgender person growing up I could never have dreamed of something like this,” Ziqubu said in his acceptance speech.

Hot Chick of The Year went to TV sensation Siphesihle Ndaba while SA’s favourite rugby captain Siya Kolisi was the obvious choice for Sport Personality of the Year.

Best Rainbow Parent Award was scooped by writer, producer, motivational speaker and poet Napo Masheane who was in attendance with her beautiful son. Rainbow UCT took Best LGBTIQ Student Movement and Best LGBTIQ Initiative in the Public Sector Award went to Constitution Hill for their ongoing support of all things queer.

OUT’s Engage Men’s Health project, which provides free HIV and sexual health services to gay, bi and other men who have sex with men in Johannesburg, Pretoria and the Eastern Cape, won the Best LGBTIQ Initiative: Private Sector award. 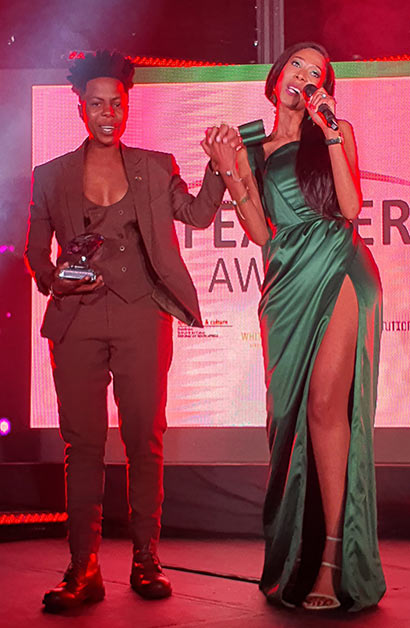 Super talented model and entertainer Refilwe Modiselle scooped the Diva Extraordinaire of The Year award while the Media Award of The Year went to TV show Motswako. Coconut Kelz won Social Media Personality of The Year.

The ever-fabulous Vaivi Swartz and Sape Maodi-Swartz represented in true Feathers style as they scored the Cutest Couple of The Year gong.

Role Model of The Year went to Dr Dulcy Stapler Rakumakoe for her work in providing inclusive and accessible health care and Somizi and his show Dinner Kwa Somizi won the Drama Queen of The Year category.

Olwethu ‘Olwee’ Mlotshwa was crowned Socialite of The Year while the Musician of The Year award was presented to Master KG, whose Jerusalema has become a global hit. “Thank you to the LGBTIQ community,” said Master KG, adding, “Never give up!”

Fag Hag of The Year was a tie between businesswoman Shumi Dantile and SA’s number one LGBTIQ supporter, entertainer Siv Ngesi. The Simon Nkoli Award was bestowed to legendary South African singing sensation Gloria Bosman, who wowed the audience with a powerhouse live performance

The African Feather of the Year accolade went to inspiring Ugandan LGBTIQ advocate Dr Frank Mugisha. Having won the Robert F. Kennedy Human Rights Award and Thorolf Rafto Memorial Prize 2011 for his activism, this Executive Director of Sexual Minorities Uganda (SMUG) continues to be one of the most prominent advocates for LGBTIQ rights on the continent.