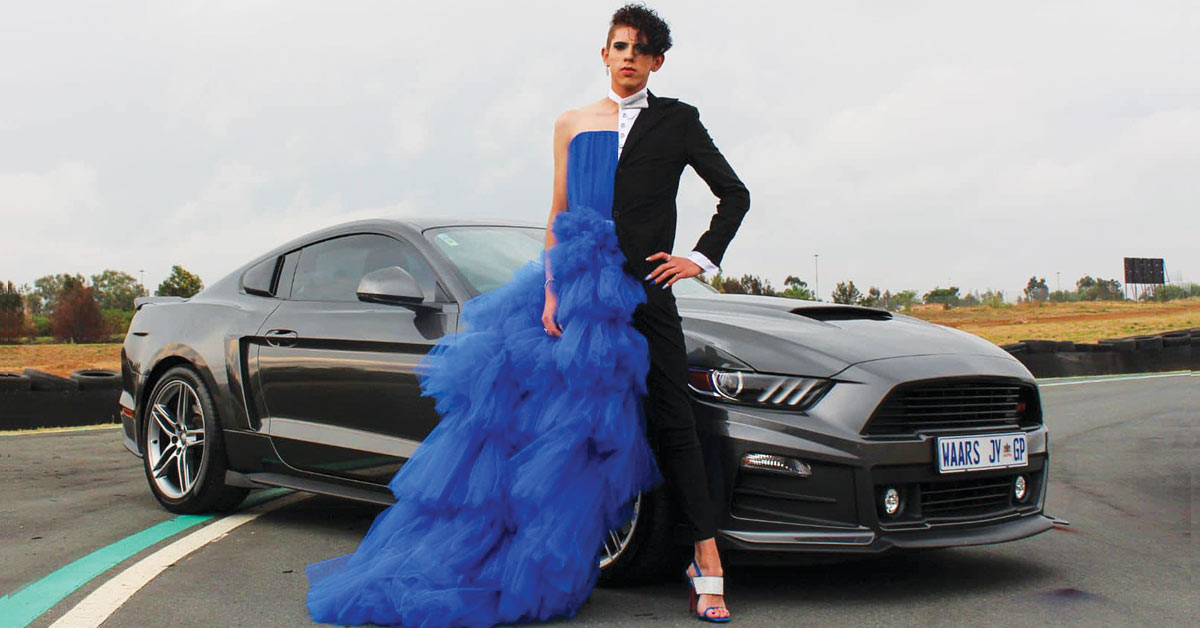 With the support of his parents, the 18-year-old arrived at the Sion Private Academy event last month with his boyfriend while wearing the suit-dress. A video posted online shows the couple walking into the venue and being greeted with cheers from classmates.

Ellerbeck, who has been out as gay at school since the start of his matric year, tells MambaOnline that he was inspired by actor Michael Urie’s similar gender-bending 2019 Met Gala ensemble, designed by Christian Siriano.

“I wanted to show young people that you can be who you want to be. And especially with it being so hard in South African schools if you don’t fit in with their specific norm or you don’t fit into the crowd, and you are seen as an outcast. You get bullied and pushed to the side so easily because of a little difference,” Ellerbeck says.

Because of initial uncertainty about whether the farewell would go ahead at all due to Covid-19, he only had two-and-a-half months to find a designer and have the outfit made according to his vision.

“Most people did not have the guts to do a design like this. So it really was a struggle to find someone,” he reveals. Thankfully designer Francisco Chico Barreto was up to the task.

The design was kept secret from his colleagues and the school who had no idea about his plans until he arrived for the farewell. “I was a bit nervous because I did know how everyone was going to react but I also felt very confident at the same time because I was waiting for that moment for so long.”

The response was overwhelmingly positive and affirming. “The crowd went crazy! The people living across the street came out of their houses to take pictures so it was really very positive especially from all of my friends who supported me throughout the year. The teachers were also very shocked but very supportive.”

He adds: “It was honestly a very successful night with no judgment. We enjoyed ourselves and it was more than I hoped it would be. I didn’t expect everyone to be that cool about everything.”

Ellerbeck plans to go on to study interior design and to also work as an LGBTIQ+ rights activist, reflecting his passion to make a difference when it comes to equality, diversity and inclusion.

“The statement I wanted to make was to uplift and inspire people and young teenagers to just show them that you can be yourself, no matter what, and always just stay true to who you are. I did accomplish that and I got my voice and my story heard,” says Ellerbeck.