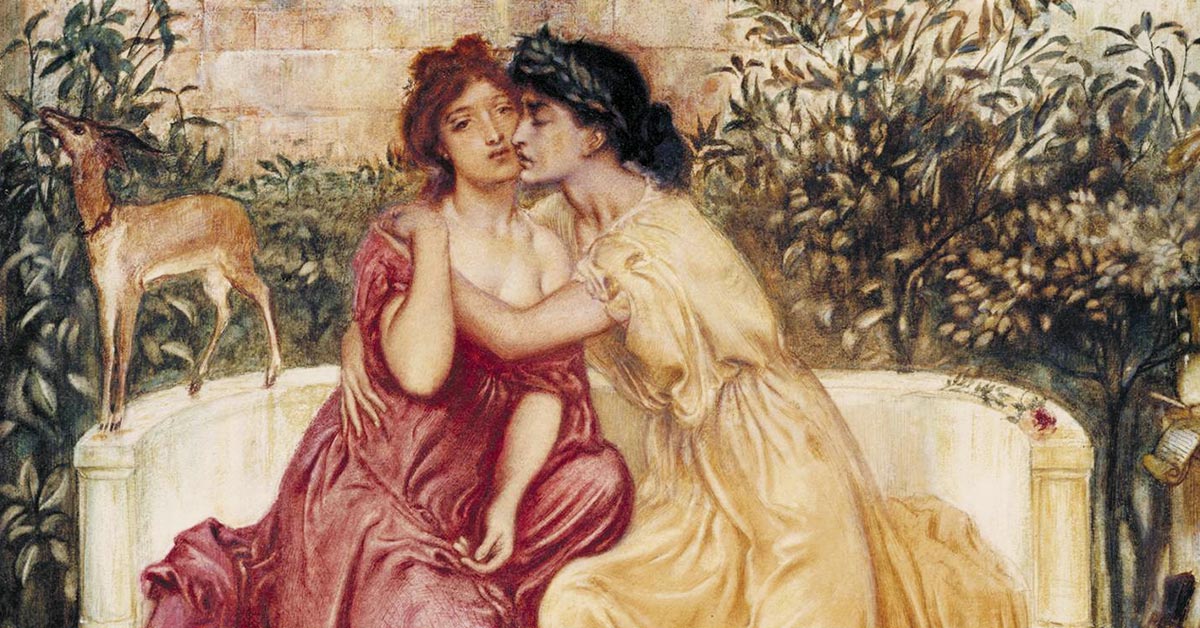 Sometime in 600 BC, the poet Sappho was born in the ancient city Mytilene on the Greek island of Lesbos and went on to inspire women who love women around the world for centuries.

We have access to very little information about Sappho’s life. Among the thousands of lines of poetry Sappho is said to have written, only two complete poems remain today, along with a few fragments from other poetry.

We can, however, assume that the Poetess (the capitalisation was used to refer to her in the same breath as Homer, the Poet with a capital “P”) was brought up in a privileged household, which afforded her the opportunity to acquire a formal education.

This meant that Sappho was well versed in performance, music, and choral composition. All of this training would surely have had a hand in establishing Sappho as the foremost lyrical poet of her time.

Just like her contemporaries, Sappho’s lyrics spoke of myths, legends and the gods. What distinguished her from many other ancient poets is the fact that Sappho also often composed verses filled with passion, desire and romantic love for people of the same sex as she was.

Although thoroughly straightwashed throughout history, with many of the pronouns in her poetry changed to reflect heterosexual desire, Sappho’s words of longing for the ladies made such an impression, that the term “lesbian” was derived from the island of her birth, and used to refer to women-loving women centuries later. From Sappho’s name we also have the term “sapphic”, often used to refer to lesbian matters.

Whether Sappho was actually a gay woman in the sense that we understand homosexuality today is still up for debate. Even if Sappho’s surviving poetry contains numerous references to the beauty of women and uses imagery like sweet scents and flowers to portray feminine sensuality, it’s almost impossible to confirm her sexuality.

Sappho’s references to homosexual love also tie in perfectly with ancient Greek society’s lack of distinction between relationships that were heterosexual and homosexual – these were simply viewed as romantic relationships.

Of course, it’s telling that much of the fragments of Sappho’s poetry that did stand the test of time were of a romantic nature. Indeed, it would seem, the topic of love has always been popular, and Sappho’s focus on this aspect of human existence certainly contributed to her long-lasting legacy.

Sappho’s command of the written word has endured millennia, and it’s easy to see why. This skilled bard had a way of expressing affection that her peers admired and envied, and her writing feels apt, especially as queer sexuality, in some places in the world, is becoming more accepted and affirmed.

Read one of Sappho’s complete poems, Ode to Aphrodite, below, and scroll down to hear what these haunting words would have sounded like in Ancient Greek in Sappho’s time around 2,600 years ago (courtesy of the late Stephen Daitz, a professor of classical languages).

On the throne of many hues, Immortal Aphrodite,
child of Zeus, weaving wiles: I beg you,
do not break my spirit, O Queen,
with pain or sorrow
but come – if ever before from far away
you heard my voice and listened,
and leaving your father’s
golden home you came,
your chariot yoked with lovely sparrows
drawing you quickly over the dark earth
in a whirling cloud of wings down
the sky through midair,
suddenly here. Blessed One, with a smile
on your deathless face, you ask
what have I suffered again
and why do I call again
and what in my wild heart do I most wish
would happen: “Once again who must I
persuade to turn back to your love?
Sappho, who wrongs you?
If now she flees, soon she’ll chase.
If rejecting gifts, then she’ll give.
If not loving, soon she’ll love
even against her will.”
Come to me now – release me from these
troubles, everything my heart longs
to have fulfilled, fulfill, and you
be my ally.