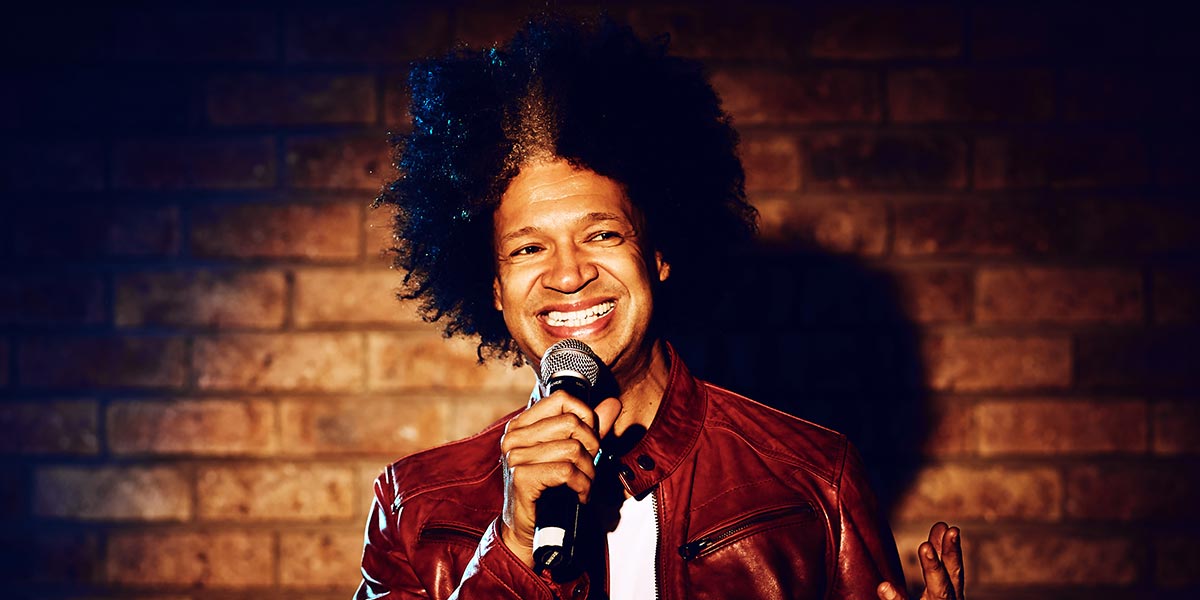 Wild-haired comedian Marc Lottering has been bringing laughter and entertainment to South Africa since he started performing back in 1997. Since then this one-man comedy sensation has graced the stage in a variety of hilarious shows. He blends his uniquely South African stand-up humour with instantly recognisable characters: From Aunty Merle to Pastor Brandon, Marc caricatures some of our most prominent stereotypes in the funniest way possible, yet with insight and pathos.

He’s even ventured overseas, taking his comedy to New Zealand, the UK and Canada for ex-pats and locals alike. Many might not know it, but Marc is openly gay and is set to perform at the upcoming Pink Jacaranda Music Affair. The funnyman took some time out of his hectic schedule to chat with Mambaonline about his comedy, being gay, and the results of drinking too much wine…

How do your fans react to the news of your being gay?

It seems to be a non-event to most people. I dress well. I smell great. COME ON… [Laughs]

When did you first come out and who was it to?

I came out in 2000. All year. To anyone who was within earshot… after two glasses of wine.

Your late father was a Pentecostal Pastor; did you ever discuss your sexuality with him?

Never one-on-one. He was elderly and sickly, and we adored each other. He knew, but we never spoke about it at length. It wasn’t necessary.

Has being gay influenced your comedy routine in any way?

Well I dress a lot snappier than most of the male comics around! [Laughs] My material is influenced by me, and by the way I see life. So I guess I cannot separate the material from being gay. At the same time, I don’t step on stage with a pink microphone and a way-too-tight white vest. I just go out there and tell my stories, the way I see it.

What’s the funniest thing about being gay?

Introducing someone as your boyfriend at a dinner party, after some presumptuous straight person has just had a very butch homophobic conversation with you.

Speaking of boyfriends, are you involved with anyone at the moment?

I’ve been with Anwar McKay for 12 years. He photographs damn well.

Is there a line between being funny and being offensive? If so, how do you navigate it?

There is a line for sure. You’ll be guided by your conscience – and by the unsettling reaction from the audience – once you’re up on that stage. There’s no text-book approach, but you’ll know…

What made you abandon your studies to become a lawyer and instead pursue a life in entertainment?

At varsity, I was failing on a spectacular level. There are only so many times you can ask to rewrite an exam “on compassionate grounds”.

Were you a naturally born comedian or did you have to work at it?

I’ve always enjoyed the idea of people laughing around me. So there’s a natural side to it I guess. But in terms of stage-craft and technique, for any performer, that comes with experience. You hopefully get better and better with every gig.

What made you decide to perform at the Pink Jacaranda Music Affair?

I had way too much wine when some good-looking man pitched the idea to me at a club in Pretoria. I saw the emails of confirmation the next week and thought: “Oh shit…”

What can people expect from your performance?

It’s a fun entertaining event, and I hope to keep people laughing every time I open my mouth.

Have all the characters that you’ve created been inspired by certain people in your life?

Yes and no. Some people I’ve met, and others I see on the street around me on a daily basis.

Do you consider characters like Auntie Merle a kind of drag?

No. She’s very real and so not outrageous.

How much of your show is usually straight stand-up and how much character sketches?

Your comedy is so uniquely South African. How do international audiences react?

I perform for ex-pats when I’m overseas, so they shriek with laughter and become quite sad with nostalgia. I also try to read the papers when I get to their countries so that I incorporate their headlines into my gig. I’ve just returned from an Australian tour which was helluva fantastic.

What projects are you working on at the moment?

A return season of my one-man show Naughty Forty runs at the Market Theatre in September. The show has been performed across the country and overseas, to packed houses. If I have to say so myself, the show rocks! I’m also currently in rehearsal for a show called Three Wiser Men, with Nik Rabinowitz and Riaad Moosa, directed by David Kramer, which opens at the Baxter Theatre in Cape Town in November.

Have you ever considered venturing into film?

Yes. But I don’t think I’m good on film. We’ll see. My life has been full of surprises.

What’s the most embarrassing thing that’s happened to you on stage?

I slipped and fell while singing. I did the second verse on the floor.

The Pink Jacaranda Music Affair takes place on Saturday 15 August at the Voortrekker Monument’s Amphitheatre in Pretoria and features live performances by Karen Zoid, Eden, Elzabe Zietsman, Melanie Lowe and Marc Lottering. Tickets are R 50 for the day (10 am – 5pm) and can be booked at Computicket or bought at the entrance on Jan Smuts Road on the day. Visit www.pinkjacaranda.co.za for more info.