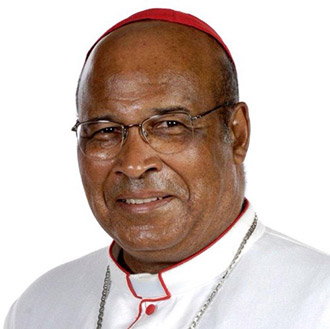 Roman Catholic Cardinal Wilfred Napier, the Archbishop of Durban, has claimed that America is enslaving Africa by trying to force it to accept homosexuality.

The extraordinarily misguided and dangerous statement was made by Napier in an interview with Fatima Asmal of the Mail and Guardian, published on Friday.

Napier (72) told Asmal that same-sex marriages go against “reason and revelation” and that the sole purpose of marriage is to procreate.

“…the basic fact of life is that men and women were made to create life together. There’s something radically wrong with the thinking that marriage can be devoid of the concept of bringing life into earth,” said Napier.

“We are trying to invent something. As far as church is concerned, sexual activity is for within the confines of marriage; for procreation and the building up of the relationship between the couple. You can’t practice in the Catholic Church if you aren’t married and are sexually active,” Napier insisted.

He then unabashedly perpetuated the damaging myth that the Western world is imposing homosexuality onto Africa and also implied that he is in support of jailing gay people.

“With the same-sex marriages, we are carrying out someone else’s agenda. It’s a new kind of slavery, with America saying you won’t get aid unless you distribute condoms, legalise homosexuality…”

He further revealed his startling ignorance by claiming that he can’t be accused of homophobia “because I don’t know any homosexuals”.

Napier was recently at the centre of an international controversy when he told the BBC that paedophilia is a medical issue not a criminal one.