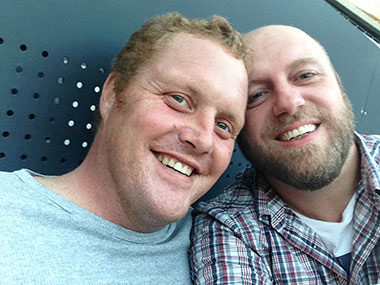 An engaged Paarl couple snubbed by a wedding venue because they’re gay have told Mambaonline about the humiliation of being treated like second class citizens.

The Weekend Argus reported that Emile Butler and Gareth O’Brien approached the Diemerskraal farm to host their dream wedding after they got engaged on the ninth of March.

The farm, which is both a vineyard and a cattle farm, is owned by the Morkel family and, according to its website, is “perfect for weddings, birthdays, conferences and even the launching of a new vehicle / tractor or aeroplane”.

“I had been at a wedding there previously and I knew that Gareth would love it too. I emailed them on 18th of March and never heard anything,” Butler said, noting that “nowhere on their website does is say it’s for straight couples only”.

He then phoned the venue and was at first told that their request would not be a problem and that he would soon be e-mailed a price list.

After the farm failed to contact him again, Butler messaged the venue and was finally told via SMS that they were now no longer welcome.

Jeanette Morkel confirmed to the Weekend Argus that they would not allow the couple to use the premises to get married because she was “not at peace with the situation”.

Butler told Mambaonline that the couple were “devastated and extremely hurt,” adding that “we felt like outcasts, like lepers. Why is our money not good enough for them? I feel like I’m living back in the apartheid era.”

When asked why he chose to go public with the matter, Butler said his fiancé told him that “we shouldn’t do it for us, but for all those other people who are in the same situation as us. We need to stand up and tell people what is going on and make people aware that there is still a lot of discrimination against gay people in South Africa.”

Butler, who wants an apology from the Morkel family, has lodged a complaint with the Human Rights Commission who told him that he has a case. “I have now left it in their capable hands,” he said.

The couple have been together for almost a year and a half. Butler said that there was immediate chemistry when he first met O’Brien.

“Everything was just right. He the kindest person under the sun,” he said about his fiancé. “He’s everything I’ve looked for in a partner and we have so much in common; the outdoors, animals – especially supporting the SPCA – and cooking.”

Butler revealed that since the story broke on the weekend, the couple have been approached by the Bellingham Homestead near Franschhoek who have offered their venue for the wedding at a reduced rate and have also offered to donate the proceeds to the SPCA.

“We are still going to go see the Bellingham Homestead but it’s very exciting,” he said. The couple plan to tie the knot sometime next year, depending on the availability of the final venue.

Under the Promotion of Equality and Prevention of Unfair Discrimination Act of 2000 individuals, companies, organisations and government departments cannot discriminate against anyone on the grounds of race, gender, disability, sexual orientation or religion/belief.