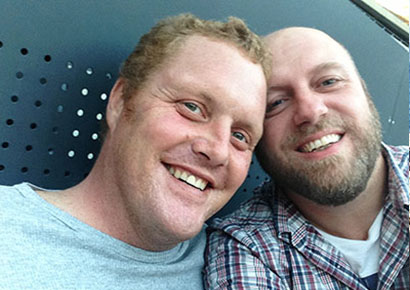 For some inexplicable reason many South Africans still wrongly believe they have a right to discriminate against others if, in their hearts, they feel uncomfortable with treating their fellow human beings with equal concern and respect.

Daan and Jeanette Morkel, owners of Diemerskraal wine estate in Paarl, who decided that it “didn’t feel right” to “allow” a gay couple to marry on their property, are just two people labouring under this mistaken belief. But the law is not on their side.

Imagine you have a disabled child who moves around in a wheel chair. Now imagine Vodacom, Cell-C, 8-ta and MTN all “feel uncomfortable” with selling their product to your child because they think it would be bad for their brand to be associated with a disabled person. Imagine, further, that Pick &amp; Pay, Woolworths, Checkers and Shoprite similarly “do not feel right” about allowing a person in a wheel chair to shop at their supermarkets. Imagine SAA, Kulula, British Airways and whatever other fly by night airline operating in the country similarly feel that it would be against their principles to allow passengers in wheelchairs onto their flights.

Imagine every guest house and hotel owner in the town you intend to visit for a holiday adhere to religious beliefs that command them to discriminate against disabled people and bar your child from access to their establishments. Imagine every restaurant owner in the town or city you live in believe that their god would not want to allow a disabled person into their establishment. Although strangely irrational, bigotry is endemic and it would be difficult to persuade such business institutions that they would be better off not discriminating against disabled people ﾖ especially if the discrimination is justified on religious grounds. Some people who would not hurt a fly have a tendency to blindly support harmful practices because they believe these practices are mandated by their religious beliefs.

Unless the law prohibits all these private institutions from discriminating against your child on the basis of his or her disability, both you and your child will be denied your basic rights to live a life in which your dignity is respected and protected. A failure of the law to ban such private bigotry will have disastrous consequences for all disabled people, who will be treated as semi-humans not worthy of concern and respect.

The absence of a legislation banning private discrimination would relegate some citizens to second class status. In a capitalist society private institutions often have powerful influence on the lives of citizens and merely banning the state from discriminating against citizens would sanction the most egregious forms of unfair discrimination in the name of the freedom of the few.

The owners of these private companies might argue that in order to protect their own freedom of choice and the right to private property the law had to “respect” their private (bigoted) beliefs or feelings and should therefore allow them to discriminate against whom they want. If they don’t want to have gay men marry on their business premises they should be able to say so. If they want to prohibit black people from using their business premises to get married they should be able to do so as well. In short, they argue that to deny them the right to act like bigots is itself bigoted.

A law that prohibits a business from discriminating against others based on the race, sex, sexual orientation or disability of the potential customer is not preventing the owner from holding his or her bigoted views. Such a law does not ban the owner from abhorring disabled people or believing that his or her god demands him to hate all disabled people. The owner continues to have the right privately to hold these views and to apply these views when deciding who gets access to his private home. The business owner is not forced to invite the disabled person to his own house for a drink or a braai. Neither would the law require him or her to change his bigoted views about disabled people.

What laws regulating businesses normally do is to require the owner of a business to meet various minimum norms and standards in order to carry on a business. This the law does to protect the public from the harm that might ensue if unscrupulous business owners indulge in practices to the detriment of customers. That is why the owner of a business must obtain a business licence and, if he or she wants to sell liquor, a liquor licence too.

The owner of a guest house would have to meet minimum hygiene and safety standards. No one is going to argue that the owner of a business has a right not to install a fire hydrant at his guest house because he or she “feels uneasy” about this terrible invasion of his property rights. You cannot open a 500 seat theatre and refuse to install fire hydrants or emergency exists. Similarly you have a duty to comply with the prohibition on unfair discrimination.

If the owner of a business does not want to comply with the minimum standards (imposed to protect customers from harm) for conducting business then he or she would have no business to conduct business in South Africa at all. If, say, a business owner tells us he or she would like to offer accommodation in a life threatening structure teeming with cockroaches and TB bacteria because he “feels uneasy” about providing a safe and clean environment to human beings because his or her god instructed him to infect the world with TB, we would start asking around for the number of a good psychiatrist. Of course, the person is free to emigrate to a country where the law does not protect the general public against exploitation and against harm. He is also free not to use his property for business purposes.

This is all uncontroversial, I would think. Only the most extreme crackpots would argue that the state has no right to regulate businesses to protect the general public from harm because such regulation would infringe on the freedom of conscience of the business owner or on his or her property rights. When you offer your services on private property to the general public you choose to subject yourself to the applicable minimum norms and standards aimed at protecting the public from harm.

But somehow when the law prohibits a business owner from unfairly discriminating against a gay couple, many people suddenly argue that these obviously sound and uncontroversial general principles should no longer apply. This means the argument they make is not one based on principle. Instead, it is an argument based on emotion and on their own racial or homophobic bigotry.

Samantha (L) and Kally Mabe (R) have been told to remove their son
from the Secunda Highveld Christian School because they’re lesbian.

Luckily our law does not sanction such prejudice. Section 9(4) of the Bill of Rights explicitly prohibits any person (including a juristic person) from unfairly discriminating ﾖ either directly or indirectly ﾖ against anyone on the basis of race, sex, gender, sexual orientation, and a long list of other grounds. The section also instructs Parliament to pass national legislation to prevent or prohibit such private discrimination.

This Parliament did when it passed the Promotion of Equality and Prevention of Unfair Discrimination Act (PEPUDA). This Act overrides the common law property rights of an owner. So when you see a sign at a restaurant, bar or holiday resort that the “right of admission is reserved”, you must know this rights has been qualified by the PEPUDA Act.

Yes, as the owner of private business you have a right to refuse admission to a prospective client ﾖ but not on the basis of a persons, sex, race, sexual orientation, disability or any of the other grounds listed in section 9 of the Constitution. If you do, you are harming that prospective client. The law often prevents owners from indulging in business practices that harm consumers and in the case of PEPUDA it does so by protecting vulnerable groups against the harm of being treated like a second class citizen.

It is important to note that PEPUDA also bans indirect discrimination. This means a business cannot use seemingly “neutral” criteria to admit or exclude patrons which will have the effect of excluding a disproportionate number of people based on one of the prohibited grounds like race, sex and sexual orientation. Often clubs or bars invoke an (imaginary) dress code to exclude black or gay and lesbian patrons. Or a business might exclude you because it is “full” (while allowing other white or heterosexual patrons entry).

These are examples of indirect discrimination and once you have shown that you have been treated differently from others it will be assumed it is based on your race, sexual orientation or other prohibited ground. The owners will then bear the onus of proving that they did not exclude you because you are black or gay. This will be rather difficult to do. This means that owners of private establishments should think twice before invoking their now severely truncated “right of admission reserved”. It also means that those refused entry or service on spurious grounds will often have a strong legal case of discrimination against the owners of a business.

Not knowing this basic legal fact, Daan and Jeanette Morkel, owners of Diemerskraal, have actually been stupid enough to admit to the whole world that they are breaking the law.