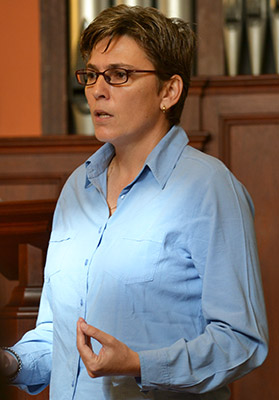 Ecclesia de Lange, the lesbian Methodist minister fired for marrying her partner, says she was stunned by the “hostility” of the Supreme Court of Appeal justices who heard her case this week in Bloemfontein.

De Lange has been fighting for more than four years to have her job reinstated after she was dismissed by the Methodist Church of South Africa in 2010. On Tuesday, the court heard her appeal against a June 2013 ruling dismissing her case and forcing her back into arbitration with the Church.

Writing on Facebook, the clearly disappointed De Lange commented that “the apparent hostility from the judges took me by surprise.”

She said that within the first five minutes of her advocate, Anna-Marie de Vos, presenting her argument, “I sensed that this was not going to be as [I] expected.”

De Lange explained: “One judge would ask a question and without giving my counsel an opportunity to respond or even finish her response, another would interject with comments and questions (which they apparently seemed already to know the answer to).

“When the time came for the Church to present their case, interestingly the opposite occurred. There was no interjection and no interrogation from [the] justices. Only heads nodding (as signs of approval) as the counsel proceeded to finish his speech.”

De Lange said that she was “stunned, irritated and disappointed with the process and attitude of [the] justices. Fortunately with the help of my wife, Melanie, my legal team and some supporters we could share our feelings and thoughts after the hearing. This and a good cry session has brought some relief and healing.”

The court reserved judgement on the matter and is expected to deliver its decision within a month.

De Lange added that she is “determined, more than ever, to see this case through until I have no more options to pursue.” Should the Supreme Court of Appeal rule against her, De Lange would likely next take the matter to the Constitutional Court.

De Lange is rejecting further arbitration as it previously failed and would be undertaken through the Church’s own arbitration process, which she claims is biased against her, unfair and pointless.

The Methodist Church insists that the former minister’s dismissal was justified because she broke the Church’s rules by marrying a woman. It says that while the issue of same-sex marriage is still under debate in the Church, it only currently recognises marriage between a man and a woman.