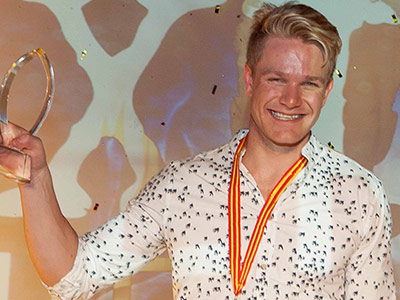 A 25-year-old Pietermaritzburg-born Joburger has won the title of Mr Gay South Africa 2015.

Craig Maggs beat out 11 other finalists at the glittering Grand Finale ceremony at Emperors Palace on Saturday night.

Maggs works for an HIV and Ebola research NGO during the day and is a waiter at Beefcakes restaurant in Illovo, Johannesburg, at night.

His family moved to Zimbabwe when he was two, and he returned to South Africa at 18 to study at Stellenbosch University.

“I feel incredibly privileged and honoured that the judges saw something in me,” Maggs exclusively told Mambaonline on Sunday. “The group [of finalists] is amazing and I would have been happy if any of them won. I am also really happy that I can stand for people in Zim.”

He explained that as Mr Gay South Africa, “I would like to make a platform where LGBTI youth can be brought into contact with role models, to inspire them and help them through rough years.” He added: “I would also like to encourage more interaction through health and fitness related programs.”

The runners-up in the contest were Siya Khumalo, a buying and planning assistant and blogger from Durban, and Mortimer Van de Westhuizen, a business development officer from Cape Town.

Maggs said that he doesn’t intend his reign to be a solitary one. “The way I see it, every person on that stage is going to be involved in whatever I do. We are a team that won and were chosen to make a difference in our communities,” he said.

The event was hosted by media personality Anele Mdoda, but not without some controversy. She was criticised after she tweeted before the event: “About to jump on stage at Mr Gay South Africa or as my friends and I like to call it… A waste of good looking men.” (Read more here.)

That the competition was won by a white contestant for the sixth year in a row was also the subject of some commentary on social media. Previous organisers have in the past blamed this on their difficulty in convincing men of colour to enter the contest.

Maggs, who took over the title from last year’s winner, Capetonian Werner de Waal, will represent South Africa at the Mr Gay World contest in Knysna and Cape Town in April and May.

South African contestants won the international contest in 2010 and 2011, and came second in 2012. Chris Olwage, who won in 2013 representing New Zealand, was born and raised in South Africa.