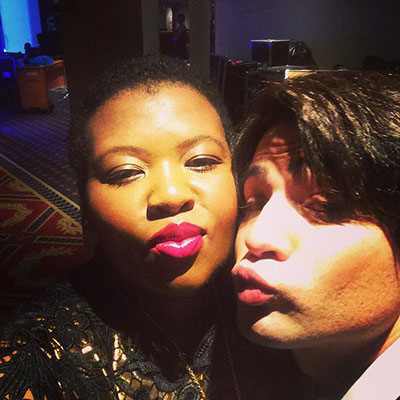 Radio presenter and television personality Anele Mdoda has been criticised on social media for a tweet in which she described gay men as “a waste.”

Mdoda may have intended for the tweet to be a humorous one but some found it deeply offensive.

George (‏@GeoDT ) responded: “@Anele your friends are sick for calling gay men that!!!”, adding “Anele you better rectify that damm statement sis. Am not a waste of anybody.”

Coenie Kukkuk, Mr Gay World Director for Africa & Middle East, wrote on Facebook: “Not nice to be called a waste by a straight lady.” He went on to say: “We are people just like you are with the same rights, trials, tribulations, problems. Highs and lows. We are the same as you. We are not a waste. We are worthy. So offensive and unacceptable.”

Transgender rights activist Liesl Bjorn Theron agreed, commenting: “Not only unacceptable – also sexist. It is based on the assumption that heterosexuality is the ‘normal’, the default.”

Mdoda responded on Twitter: “Please do not look to be offended at every second. If you are gay and hot you are lost to us and that’s a waste. Calm yourselves nxa.”

She had some defenders, who insisted that the tweet was complimentary and that her detractors lacked a sense of humour. Hilly Maringz ‏(@Hangwi_SA) tweeted: “@Anele I understood what u meant. It’s a waste to us cos we can’t have them as hot as they are…English maan. People take life 2 seriously.”

Theron, however, argued: “The thing is as a queer person, who is also an outspoken activist and daily read about queer youth committing suicide, or being murdered: where do you draw a line? Do you realise that just one too many ‘nice intended joke’ is all it takes to topple a depressed teenager to suicide?”

She urged straight allies “to sometimes hear” when LGBTI activists “point out how insensitive language is unacceptable.”

Mdoda has been in hot water before for her comments about the LGBTI community. In April 2012 she was slammed for statements she made on her 94.7 Highveld Stereo radio show concerning a transgender contestant in the Miss Universe Canada pageant.

Mdoda and her co-host questioned how a “man” could take part in a women’s pageant and asked where Talackova hid her “male” parts when parading in a bathing costume. They also referred to her as an “it”.

The matter was heard by a Broadcasting Complaints Commission of South Africa (BCCSA) tribunal, which ultimately dismissed the complaints against Mdoda. The BCCSA ruled that the comments were not hate speech and noted that 94.7 Highveld Stereo had apologised and “indicated that it wishes to make amends for the hurt caused.”