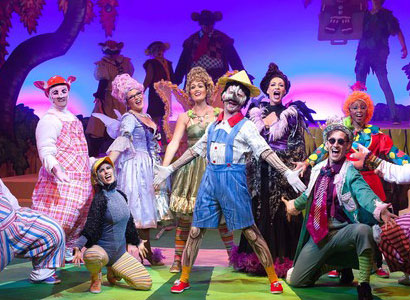 Musicals! It’s a genre you either love or hate. Shrek, at Gold Reef City’s Lyric Theatre, however, is not like most other musicals – well not like the ones I’ve ever seen.

Based on the 2001 DreamWorks animation film of the same name, you know that you’re in good hands. Forget your Stephen Sondheims and Andrew Lloyd Webbers, Shrek the Musical is different in so many ways.

Fresh from Broadway and the West End, Jozi audiences have been given the opportunity to watch a show dripping in international humour disguised as a children’s pantomime. I’d describe it as a very un-classic fairy tale with giggles galore.

In fact there was more laughter coming from the adults than the kids. A child behind me asked his dad, “What are they all laughing about?” So don’t be mistaken, this is definitely written for adults but also designed to entertain the kids – giving everyone something to take away and talk about.

Visually, the show is dynamic, with bags of familiar characters that the kids will adore. There’s the Three Little Pigs, Pinocchio, the amputee Gingerbread Man, and even tap dancing rats.

This alone gives your eyes a buffet of colours to munch on. Then there’s the very clever adult script, packed full of one-liners that come out one after another, seemingly without a break. 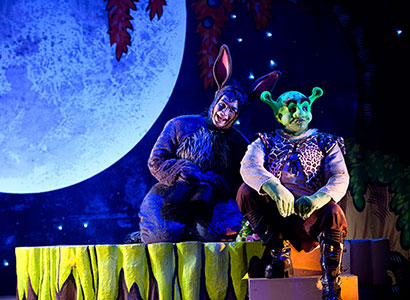 The show is directed and performed by a South African cast, delivering a production we should all be very proud of.

Rory Booth wowed the audience as Donkey from his very first entrance; the gayest portrayal of any character on stage today. It must be a dream role to take on but it’s not without its difficulties.

Booth’s stunning use of his very difficult costume and a camp American uptown New York accent made every second of his performance an absolute joy.

Never overdone or underplayed, his rapport with Shrek, played by Lyle Buxton, was the classic vaudevillian comedy act. The straight man, Buxton generously sets up every line for Booth’s sometimes genius delivery of the slapstick humour.

This is not to underestimate the hard work of Buxton and his love to be, Princess Fiona, played by Jessica Sole. Her voice was beautiful at times and intentionally bad at others, adding more layers to this very unusual fairy tale.

His character’s dance routines amazed, especially as he performs the whole show on his knees! This piece of costume ‘trickery’ brings a smile to even the glummest theatre goer and allows for some hilarious physical comedy. Some of which you could easily miss, it’s so clever. 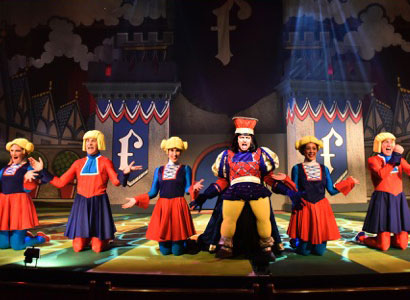 Steven Stead’s honest and very real direction lets the characters’ wonderful costumes, stunning script and beautiful sets all speak for themselves. Sometimes less is more, and that takes great skill and confidence.

This take on musical theatre is brought together by hilarious choreography, created by Janine Bennewith, using classic Fosse moves and grouping; a nod to one of the greatest musical theatre choreographers and directors of all time.

I had a great night out at the show. Borrow someone else’s children, take them as a treat and I’m sure you too will be singing the praises of everyone involved in this wonderful production.

Shrek the Musical is on at the the Gold Reef City Lyric Theatre until 17 July. Book at Computicket.