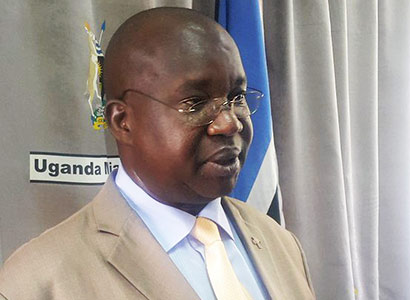 By claiming that gay people are out to rape him and announcing that he’s getting a “find-the-gays” machine, Uganda’s minister of ethics should be the laughing stock of the world – if he wasn’t so dangerous.

In a bizarre new interview with the notoriously anti-gay Red Pepper tabloid, Simon Lokodo, the so-called Minister of Ethics and Integrity, made some astonishing claims about gay people and his brutal war against homosexuality.

With senior government officials making such blatantly fabricated claims it’s little wonder everyday Ugandans may see LGBT people as an alien threat in their communities. That any legitimate government would allow such a man to serve as a minister is frankly mind-boggling.

Lokodo has been a thorn in the side of the LGBT community for many years. Most recently he ordered a violent raid on a Uganda Pride pageant that saw police beating activists and participants, leading one person to jump out of a six-storey window. (The victim was hospitalised with severe spinal injuries.)

A former Catholic priest, Lokodo has suggested in a previous interview that heterosexual rape is more morally acceptable than consensual homosexual behaviour.

He’s also compared same-sex marriage to bestiality, said that homosexuality was brought to Uganda by white people, has threatened to ban NGOs that support LGBT equality and has personally accompanied police in raids on LGBT rights workshops.

Since 2006, the Red Pepper newspaper, which routinely calls gay people “bum-drillers”, has outed gays and lesbians in its pages, often revealing private information, photos, and places of residence and work that would easily allow them to be found.

Colonial-era legislation criminalising gay sex remains in force in Uganda, allowing the courts to imprison anyone found guilty of homosexuality for life.