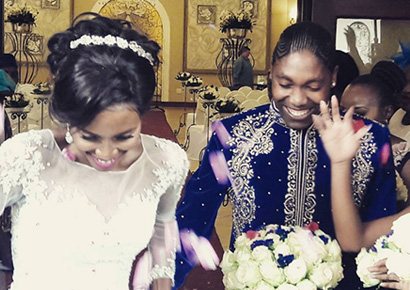 Caster Semenya and her wife Violet Raseboya have tied the knot in a surprise ‘white wedding’ on Saturday, which was also the athlete’s 26th birthday.

The Olympic champion’s social media profiles announced the happy news with a series of pictures of the ceremony at the Chez Charlene wedding venue in Pretoria.

Semenya wore gold trousers and a blue jacket with gold detailing while Raseboya wowed with a flowing white wedding gown. They later changed into yellow traditional outfits for the reception.

In one stunning black and white image of Raseboya, Semenya described her wife as “my heart”.

The couple’s relationship goes as far back as at least 2008 when fellow athletes noticed that the two had grown close.

In March 2013, Drum magazine reported that the lovebirds has gotten engaged, while it was claimed in May 2014 that Caster’s elders visited Raseboya’s family in Polokwane to negotiate and pay lobola.

In December 2015, the two women held a ceremony in Ga-Dikgale, Limpopo that was described as a traditional South African wedding.

Our congratulations to the couple. We wish them a lifetime of happiness!