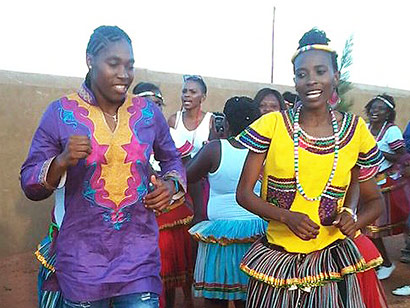 On Sunday, the SA Fame Awards Facebook page published photos of Semenya and Raseboya in a ceremony in Ga-Dikgale, Limpopo.

According to the page, “The happy couple seemed relaxed and calm while villagers ululated while others nodded in approval of this union.”

Confusingly, while some media claimed that the couple had finally gotten married in a traditional ceremony, the SA Fame Awards described it as an engagement.

Semenya, who has been extremely private about her personal life over the years, has shed no light on the proceedings or the relationship.

While there were many who welcomed the news, others were sadly far less supportive on Facebook, making deeply offensive and hateful comments.

Examples included one homophobe commenting, “Is she a lesbian, I mean who’s gonna fuck the bride?” while another raged, “Same sex marriage my foot. I don’t approve such madness in any of my family member.”

Actor, model and TV presenter Maps Maponyane ‏took to Twitter to send his best wishes to the two women. “Congrats to Caster Semenya on her marriage to her longtime girlfriend over the weekend. Forget about the naysayers. Keep living your life,” he wrote.

In March 2013, Drum magazine reported that the lovebirds has gotten engaged, while it was claimed in May 2014 that Caster’s elders visited Raseboya’s family in Polokwane to negotiate and pay lobola.

Rumours of the couple’s relationship go as far back as 2008 when fellow athletes noticed the two had grown close.

Semenya made global headlines in 2009 when she won the 800 metres at the Berlin Athletics World Championships and then became the subject of investigations and brutal speculation about her gender and sex.

In July 2010, the International Association of Athletics Federations gave Semenya the all-clear to compete as a woman. She went on to win the silver medal in the 800m at the 2012 London Olympic Games.