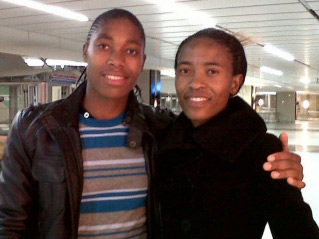 The Sunday Sun claims that Caster’s elders visited Raseboya’s family in Polokwane two weeks ago to discuss lobola ahead of tying the knot.

Lobola is a Southern African custom in which traditionally a man pays the family of his fiancée for her hand in marriage.

“Both families were happy to negotiate lobola and Caster’s family paid R25 000 to have Violet as their makoti,” an “insider” told the tabloid.

A friend added: “They really love each other and this is a bold step for them. They have a bright future together and I believe once they have settled down, they will achieve more in their careers.”

The newspaper said preparations for the wedding are already underway.

In March last year, it was reported that Semenya, 23, had gotten engaged to Raseboya, 28, who is also an athlete. Rumours of their relationship go as far back as 2008 when fellow athletes noticed the two had grown close.

The two track stars were said to wear bands on their ring fingers and drive similar BMWs with personalised number plates made up of the abbreviation of their names.

A Facebook photo also showed the couple posing next to a cake with the word “Casvio” on it, said to be an amalgamation of their names, Caster and Violet.

Semenya made a splash in 2009 when she won the 800 metres at the Berlin Athletics World Championships and then became the subject of investigations and brutal speculation about her gender and sex.

In July 2010, the International Association of Athletics Federations gave Semenya the all-clear to compete as a woman. She went on to win the silver medal in the 800m at the 2012 London Olympic Games.