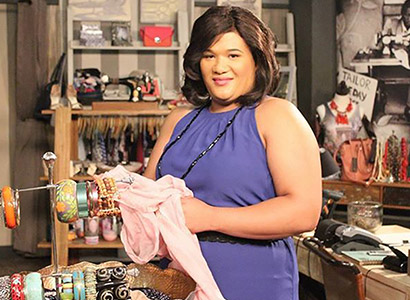 On Tuesday, the show debuted the character of Geneviève, played by 27-year-old Deonay Balie, an art and drama primary school teacher from the town of Steinkopf in the Northern Cape.

“People are going to get very fond of Genevieve,” Balie, who is also an activist, told You magazine. “She’s a strong woman and looks life squarely in the eye. She knows who she is.

“There’s no well-known transgender actress in soapies. And LGBT people (lesbian, gay, bisexual and transgender people) do have a need to tell their stories,” she said.

Balie revealed that she is openly transgender within her family and community who have supported her. “The fact that my mom, who’s 65 and from another era, can support me like this – I find that really wonderful,” she explained.

“It’s taken us a long time to get to the point that a transgender actress can appear in a series like 7de Laan, but I still think it’s wonderful they’ve decided to add a trans character to the storyline.”

As for what she’d say to critics of her casting in the show, Balie responded: “I’m a tough cookie. I’ll remind people that you don’t have to agree with someone but you should respect each other.”

Cape Town based LGBTIQ group Triangle Project said it was “proud” of Balie for taking on her very public role in 7de Laan. “Deonay has lived openly as a transgender woman where it would be easier to be invisible and now she is playing a trans woman on one of the country’s popular soaps,” commented the organisation on Facebook.

Sadly, it appears that Balie’s storyline is short-lived and she is only set to appear on the show for a few weeks. That too was the fate of the gay characters of Logan (Simon Tuit) and Divan (Arnu de Villiers), who also left the show after their headline making on-screen smooch.