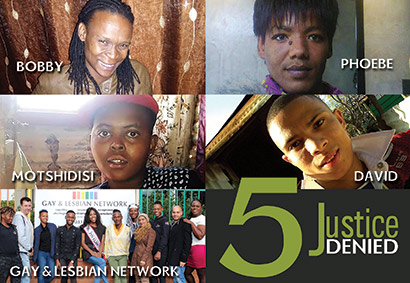 As a new campaign demanding justice for LGBTI hate crime victims is launched, it’s been reported that a young lesbian woman has been raped and stoned to death in Soweto.

Mambaonline has been informed that the body of Lerato Tambai Moloi was found in Soweto, Naledi Ext, on Sunday. It appears that she had been raped and stoned to death.

Details of the shocking murder are still unclear, but the news comes on the heels of the launch today (Monday 15 May) of the “5 – Justice Denied” campaign by Love Not Hate, as well as on the eve of the International Day Against Homophobia and Transphobia (IDAHOT) on Wednesday.

The Justice Denied campaign aims to highlight the appalling delays and injustices in five ongoing LGBT hate crime cases. The cases have been selected to illustrate severe lapses in the criminal justice system, especially when it comes to LGBTI people, ahead of protests to demand immediate action by the authorities.

The five cases being highlighted include shocking incidents of rape, torture and murder of LGBTI people as well as anti-LGBTI hate speech:

“Not only is the criminal justice system failing these and other LGBTI victims of hate, but so too are the structures initiated by government to tackle this scourge,” said Lerato Phalakatshela, Hate Crime Manager at OUT LGBT Well-being and spokesperson for the Love Not Hate campaign.

“While we have worked with the Department of Justice and Constitutional Development alongside its Task Team and Rapid Response Team for a number of years, we have now been forced to admit that these are not delivering what was expected.”

The National Task Team on Gender and Sexual Orientation-Based Violence against LGBTI Persons was announced in 2011, while the Rapid Response Team to monitor and fast track pending and reported LGBTI related cases was launched in 2014. LGBTI civil society groups now say that these units are not performing.

In the last year, of 26 cases submitted to the Task Team, just one has been successfully resolved. Of updates requested from the Rapid Response Team in September 2016 concerning 22 outstanding cases, responses to just six of the cases have been returned; and these responses can only be described as inadequate. Meetings of the teams are often delayed or do not take place, and there is still no functioning Rapid Response Team in Gauteng.

Phalakatshela noted a recent report commissioned by Love Not Hate that found that 44% of surveyed LGBTI people said they had experienced discrimination in their everyday life. Alarmingly, 41% of those surveyed knew of someone who had been murdered due to their sexual orientation or gender identity.

On the 30th of May, activists will picket in Hatfield in Pretoria demanding that the lives of LGBTI people be taken seriously. Members of the LGBTI community and their allies are urged to show their support by gathering at the offices of OUT LGBT Well-being (1081, Pretorius St, Hatfield) from 7:30 am.

Other planned protests around the country include:

East London: 17 May 2017 at 92 Currie Street, Quigney, East London from 9.30am.
Cape Town: 20 May 2017 at the Khumbulani Pride March (Starting at 10am at the Circle next to the police station on Vulindlela Street, Lwandle location, Strand)
Durban: 20 May 2017 – Anti-homophobia & transphobia beach walk from Ushaka from 10am.
Pietermaritzburg: 15 June 2017 (Further details to be confirmed).

“We can no longer remain quiet about the injustices and incompetence being experienced by members of our community, one which remains beset by discrimination and violence,” said Phalakatshela.

The Love Not Hate campaign is a nation-wide multi-partner initiative addressing violence against LGBT people. The partners are: Access Chapter 2; Durban Lesbian and Gay Community and Health Centre; Gay and Lesbian Network; OUT LGBTI Well-being; Social, Health and Empowerment Feminist Collective of Transgender Women of Africa (SHE); and Triangle Project.