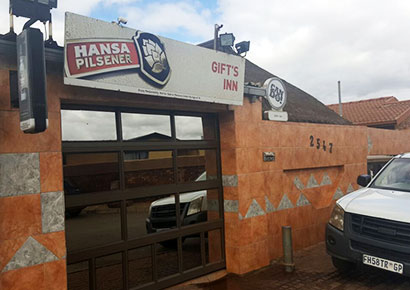 Where Moloi was last seen alive

An openly lesbian woman from Soweto has been brutalised and murdered in a suspected hate crime, the day before starting her promising new job.

On Sunday, the half naked body of 27-year-old Lerato Tambai Moloi, described by activists as a “butch” lesbian, was found in Naledi Ext.

She was discovered by community members who were cutting down tall grass in a field near a railway line. Her trousers and underwear had been pulled down. Large rocks had been thrown onto her head.

According to a police statement, Moloi also had three wounds to her neck. A knife was found next to her body. It is believed that she was raped.

Moloi was last seen in the early hours of Sunday morning at the Gift’s Inn tavern with a 38-year-old man, who has now been arrested as a suspect in the murder. Forensic samples will be taken from both the victim and the suspect, said police.

Steve Letsike, Director of Access Chapter 2, was among a group of activists who met with Moloi’s family and the police on Monday. They also visited the tavern and the location where her body was discovered.

The young woman, who lived with her aunt, had just landed a new job, which she was excited to start this week. “The family is shocked, they are traumatised,” Letsike told Mambaonline. “It’s so sad to be around them, listening to how she was going to be able to help at home and the family”.

When she left the house on Saturday, Moloi told her aunt that she would buy her something for Mother’s Day when she got her first paycheque. “She will never see another Mother’s Day. That opportunity for them to take care of one another was taken away,” said Letsike.

“I am broken. I am angry, because we are sitting here with a rise in hate crime incidents in South Africa. Prevention of these incidents is not prioritised. I think we have to face reality; that we are facing a war on women’s bodies – and particularly the LGBTI community.”

Letsike noted that the attack took place on the eve of the International Day Against Homophobia and Transphobia (IDAHOT), which will be commemorated on Wednesday around the world. (This past weekend also saw the funeral of 28-year-old Nonkie Smous, another lesbian woman who was murdered and set on fire in Kroonstad last month.)

Letsike revealed that she would be attending a meeting of the National Task Team on Gender and Sexual Orientation-Based Violence against LGBTI Persons on Tuesday.

“This can’t be business as usual. I am thinking of all the silence that we have in our country. And it starts at the helm; the president himself. Those in charge are not necessarily taking responsibility to do their duty.” 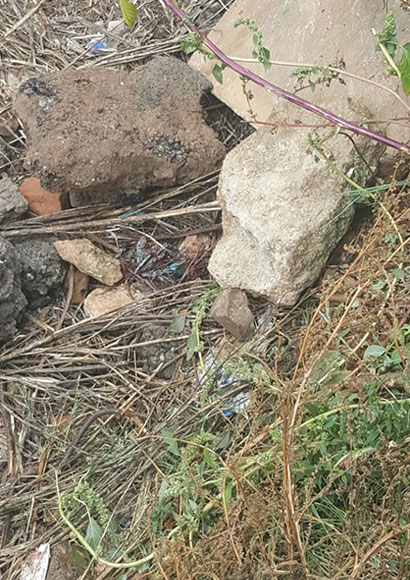 The crime scene, where Moloi’s body was found

“Not only is the criminal justice system failing these and other LGBTI victims of hate, but so too are the structures initiated by government to tackle this scourge,” said Lerato Phalakatshela, Hate Crime Manager at OUT LGBT Well-being and spokesperson for the Love Not Hate campaign.

He admitted that the Department of Justice and Constitutional Development’s Task Team and Rapid Response Team “are not delivering what was expected”.

The National Task Team on Gender and Sexual Orientation-Based Violence against LGBTI Persons was announced in 2011, while the Rapid Response Team to monitor and fast track pending and reported LGBTI related cases was launched in 2014.

In the last year, of 26 cases submitted to the Task Team, just one has been successfully resolved, said Phalakatshela. Of updates requested by Love Not Hate from the Rapid Response Team in September 2016 concerning 22 outstanding cases, responses to just six of the cases have been returned; and these responses were described as “inadequate”.

Meetings of the teams are often delayed or do not take place, and there is still no functioning Rapid Response Team in Gauteng, claimed Phalakatshela.

To find out more about the 5 – Justice Denied campaign and its planned protests, click here.