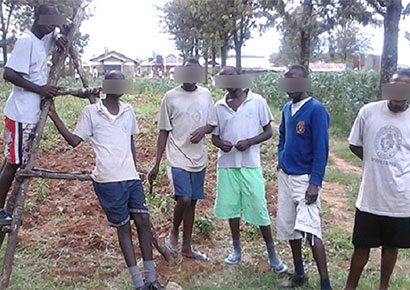 An American Christian group is promoting the “success” of a conversion therapy home for boys in Kenya that supposedly offers “a way out” for those “lured into a gay lifestyle”.

In an appalling article, the Catholic-based right-wing ChurchMilitant.com group, located in Michigan, lauded the Center for Compassion, Rehabilitation and Development in Athi River, near Nairobi. The centre is run by the Anglican Church of Kenya.

ChurchMilitant.com shockingly equates child prostitution with homosexuality, seeing no difference between rightly assisting boys who are abused in the sex trade and trying to “convert” those who are gay.

“Even after attempting to leave the gay lifestyle, boys are rejected by their families and left with no means to support themselves, forced into returning to gay prostitution,” states the site.

According to ChurchMilitant.com, Peter Mulinge, the centre’s “ex-gay” operating manager, told Arthur Goldberg, founder of the FundingMorality.com site, about one of its success stories; a youth named Tim.

“[Tim] is clearly on his way to living the kind of life he always hoped for,” said Mulinge. “He is sexually sober and recently became engaged to a woman he loves. He hopes to get married soon and establish a home and family with his wife. He is eager to tell others about his experiences and to let them know that for him change of sexual orientation was and is possible.”

ChurchMilitant.com says that a second young man who went to the centre, named Sam, believes that his past “gay lifestyle” was an “escape mechanisms for underlying emotional wounds he experienced during his childhood”.

Mulinge told Goldberg: “What is clear, however, is that [Sam] no longer desires sexual relations with other men and thus no longer acts out homosexually. Although his journey is far from over, [Sam] has made enormous progress in confronting a number of wounds from his past. [Sam] eagerly looks forward to living his life with a wife and children and to conform other parts of his life to God’s directives for human happiness.”

In its article, ChurchMilitant.com has no qualms about suggesting that homosexuality and child prostitution are one and the same, thereby reducing same-sex sexuality to a behaviour, a “lifestyle” and a form of sexual deviance. It also blatantly and uncritically supports the dangerous practice of “conversion therapy”.

Conversion therapy is the attempt to change a person’s sexuality or gender identity and has been described by some activists as a form of child abuse. (FundingMorality.com is raising funds for the Kenyan centre but fails to mention the institution’s effort to “cure” gay youths.)

Major medical and mental health organisations around the world have condemned conversion therapy as ineffective and harmful. In March last year, the World Psychiatric Association unequivocally stated that trying to “cure” LGBT people doesn’t work and is both dangerous and unethical.

The practice is banned in Brazil, Ecuador and Malta, as well as in a number of US states when it comes to minors.

These kinds of Christian-focused, Western-based interventions in Africa have played a major role in fostering deep misunderstandings around human sexuality on the continent and have been used to justify the persecution of LGBT people.

American evangelist Scott Lively is currently on trial for crimes against humanity for his role in stirring up anti-gay vitriol in Uganda and for allegedly helping to craft the country’s since-annulled 2013 Anti-Homosexuality Act.