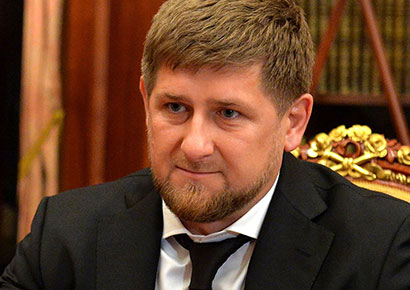 Chechen dictator Ramzan Kadyrov has denied claims that gay people have been targeted in Chechnya, yet went on to call for them to be “taken away” to “purify our blood”.

In an interview with David Scott for HBO’s Real Sports With Bryant Gumbel, set to be broadcast in full on Tuesday, Kadyrov was asked about the state’s deadly purge of gay men.

“This is nonsense. We don’t have those kind of people,” Kadyrov said, in what’s believed to his first comments on the issue to the Western media.

Scott went on to ask: “Do you not get concerned when you read these accounts of young men who say they’ve been tortured for days, does it concern you as a matter of law and order?”

An irritated Kadyrov replied: “They are devils, they’re for sale, they’re not people. Let them be cursed for what they say about us.”

According to numerous reports, since February, around 100 men “accused” of being gay were rounded up, detained in secret facilities, tortured and in some cases killed in Chechnya.

There have also been claims that the families of some victims were urged by the authorities to murder their LGBT relatives in so called “honour killings”.

Kadyrov has been accused of personally supporting the campaign to eradicate LGBT people from Chechnya, which is a predominately Muslim semi-antonymous Russian republic. A key ally of Putin, he has been implicated in numerous human rights violations in the past.

The Russian LGBT network said on Friday that since the beginning of April it had received requests from more than 120 Chechen LGBT people for emergency assistance and that it had helped evacuate over 60 from the region.

While the group had earlier stated that the arrests had come to an end, it said last week that “we are saddened to acknowledge that persecutions of LGBT people [have] started again”.

Following massive international pressure, President Putin and the Russian federal authorities promised to investigate the reports but there has been no information on any progress to date.