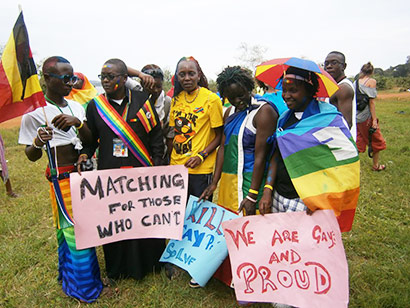 The organisers of Pride Uganda have cancelled this year’s event after being faced with threats of arrest and harm by the police and a government minister.

In a statement, the organisers said they made the decision with “heavy hearts and deep-felt sadness” but explained they could not “put the lives of so many innocent people at risk”.

Last year’s event descended into chaos and violence when police raided the Mr, Ms and Mx Pride pageant. They arrested and beat people, leading to the hospitalisation of one victim who threw themselves out of a fourth floor window while fleeing. An attempt to hold a march in August was banned by the police.

The organisers revealed they woke on Wednesday morning to find the venue for this year’s opening gala event surrounded by police. Despite talks with the authorities, police were also deployed to the festival’s other venues.

Pride Uganda accused the rabidly homophobic Simon Lokodo, the Minister of Ethics and Integrity, of not only threatening the organisers with arrest but also “revealing his intentions to physically harm one of the leaders within the movement if he came in contact with her”.

“We are all born this way”

A former Catholic priest, Lokodo has previously suggested that heterosexual rape is more morally acceptable than consensual homosexual sex. He’s compared same-sex marriage to bestiality, said that homosexuality was brought to Uganda by white people, has threatened to ban NGOs that support LGBT equality and has personally accompanied police in raids on LGBT rights workshops.

Pride Uganda slated Lokodo’s actions: “He has abused our very existence by stripping us of even the very basic of our rights, he refuses to acknowledge our humanity or right of association, speech, movement as well as freedom from degrading treatment.”

Lokodo has also claimed that LGBT people actively “recruit” others, especially the youth, to become LGBT.

“This is a misconception that has been widely spread and is sadly believed by many,” said the organisers. “We were all born this way, we have no choice over who we love or how we identify therefore it is impossible to recruit anybody or change their attraction to whoever they’re sexually or romantically attracted to.”

Pride Uganda added: “We are not cancelling Pride because of your homophobia and disrespect for our rights, this is a decision that has been taken to protect ourselves. Otherwise how else will we fight your oppression if you kill us or imprison us for no crime?”

Colonial-era legislation criminalises gay sex in Uganda, allowing the courts to imprison anyone found guilty of homosexuality for life.