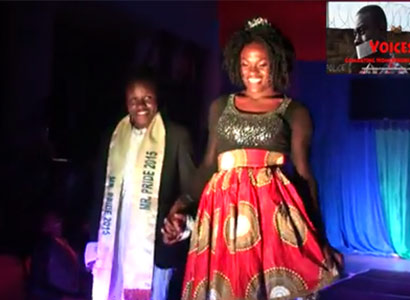 Pageant contestants moments before the raid

Organisers of Uganda Pride 2016 have postponed other Pride events after police raided the Mr, Ms and Mx Pride pageant on Thursday night.

More details of the brutal crackdown at Kampala’s Club Venom have now been revealed.

According to Sexual Minorities Uganda (SMUG) police burst into the venue at around 10:45 PM, while the pageant was underway.

Police claimed that they had been told a “gay wedding” was taking place and that the celebration was “unlawful” because they had not been informed. SMUG, however, insisted that police in fact had granted prior permission for the celebration and were fully aware of it.

Officers locked the gates of the club, arrested more than 16 people — the majority of whom are Ugandan LGBT rights activists — and detained hundreds more under gun point for over 90 minutes.

Police are accused of beating and humiliating people, taking pictures of LGBTI Ugandans and threatening to publish the photos, and confiscating cameras.

Eyewitnesses reported that several people — in particular transwomen and transmen — were sexually assaulted by police.

One person, identified only as Gerald, jumped from a four storey window to try to avoid the police abuse.

Earlier reports claimed that the person had died in hospital, but it has since been confirmed that Gerald is in a critical condition in a private hospital with severe spinal injuries.

All those arrested were released in the early hours of Friday morning without being charged with any offence.

“Excessive force by Ugandan police targeting a peaceful and lawful assembly is outrageous,” said Frank Mugisha, Executive Director of SMUG, who was among those arrested. “The LGBTI community stands with all Ugandan civil society movements against police brutality.”

“Government must condemn violent illegal actions by police targeting the LGBTI community and all Ugandans,” said Asia Russell of Health GAP. “The US and all governments must challenge President Museveni to intervene immediately and hold his police force accountable.”

In a statement following the raid, the notoriously anti-gay Minister of Ethics and Integrity Simon Lokodo, said he would do everything in his authority to make sure that this weekend’s Pride Parade did not take place.

Alarmingly, he added that if police did not stop the parade, he would call on the public to storm the venue, which the Uganda Pride Committee described as “inciting violence”.

In response, the committee announced that “all the remaining events of the Pride week [would] be postponed” pending “negotiations with top government officials to have this decision turned around”.

“This is to allow us to get enough time to also reorganise and give us all time to clear our heads and relax after what happened last evening. We will be communicating the new dates as soon as the negotiations are completed,” said the organisers.

Over the last four years, Uganda Pride has been held largely as a private event. It has not been widely advertised and details are spread by word of mouth in the community.

Colonial-era legislation criminalising gay sex remains in force in Uganda, allowing the courts to imprison anyone found guilty of homosexuality for life.

Below is footage of the moment police walked into club Venom and started arresting activists.

Activists arrested from Voices of the Abasiyazzi on Vimeo.