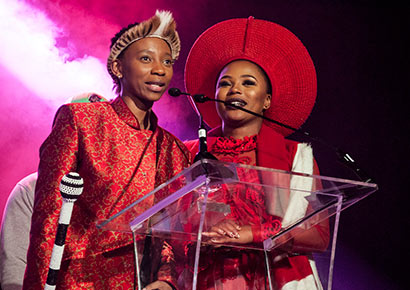 The stars (and a deputy president, kinda) came out to play at last night’s Feather Awards, but it was also an opportunity to honour activists and members of the LGBTQ community.

The 9th annual awards was held at the Theatre on the Track in Kyalami and, as always, saw a stylish, beautiful and over-the-top turnout of the who’s who in the entertainment world.

The theme for 2017 was ‘A luta continua’ (the struggle continues), a reflection of the ongoing struggles faced by LGBTQ communities on a daily basis.

Vice President (and wanna-be ANC leader) Cyril Ramaphosa made a surprise virtual appearance via a video message in which he proclaimed his support for the LGBTQ community.

He stressed the importance of “protecting the rights of all in South Africa” and urged the audience “to enjoy yourselves, affirm yourselves and your identities as well as your various diversities…” 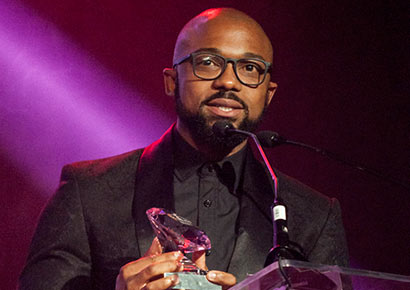 Hunk of the Year, Fezile Makhanya

The night’s big winners included actresses Mandisa Nduna and Thishiwe Ziqubu (Cutest Couple of the Year), who have proudly played out their sizzling romance on social media to the delight (and bigoted outrage) of the public.

Amstel Maboa, the last surviving member of the ground-breaking openly gay Afro-pop group 3Sum, was awarded Feather of the Year. “He’s been in the limelight, never hiding who he is, being unapologetically him,” said the Feathers.

Transgender activist Ricki Kgositau, Executive Director of Gender DynamiX, was honoured with two awards: Role Model of the Year and African Feather of the Year.

Kgositau, who was born in Botswana, is currently challenging the Botswana government in the country’s High Court over its refusal to change the gender marker on her identity document.

“The Feather Awards is more than just another event on the Joburg calendar, it’s an opportunity to highlight the challenges faced by the LGBTI communities and acknowledge the nominees that have been there throughout the year, supporting diversity,” commented Thami Kotlolo, founder of the awards.

On a lighter note, SuperSport presenter Fezile Makhanya was named Hunk of the Year, while other awards were won by a bevy of household names, the likes of Kelly Khumalo (Best Styled Female & Fag Hag of the Year), Basetsana Khumalo (Socialite of the Year) and Carol Bouwer (Diva Extraordinaire).

Olympian athlete Wayde Van Niekerk was awarded Sports Personality of the Year while multi award-winning rapper Kwesta was named Musician of the Year. 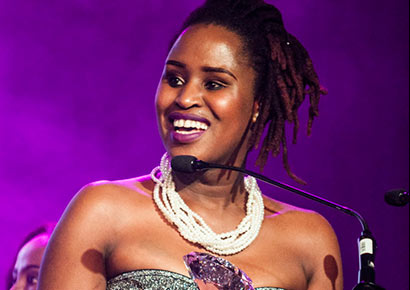 The guests were entertained with a stellar line-up of some of SA’s best talent, including Khumalo, Mshoza, Brenda Mtambo, Vintage Crew, DJ Tira and Zodwa Wabantu – as well as the Mzanzi Gay Choir.

For the second year, the hosts for the Feather Awards were the gorgeous Khanya Mkangisa and Lumko Johnson while Ayanda Makhuzeni and Leroy Marc welcomed guests to the event on the pink carpet.

The sponsors included the Gauteng Tourism Authority, Starbucks SA and NYX Cosmetics alongside The Other Foundation and The Thami Dish Foundation.

Below is the full list of the 2017 Feather Awards winners. 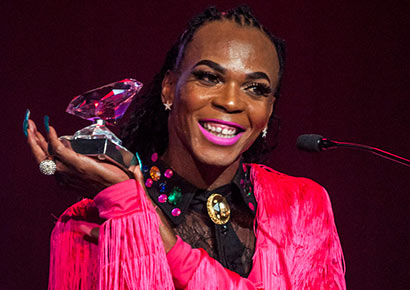 HUNK OF THE YEAR – Fezile Makhanya

CUTEST COUPLE OF THE YEAR – Mandisa Nduna and Thishiwe Ziqubu

FAG-HAG OF THE YEAR – Kelly Khumalo

SOCIALITE OF THE YEAR – Basetsana Khumalo

MUSICAN OF THE YEAR – Kwesta

FEATHER OF THE YEAR – Amstel Maboa

Pics by David Penney. To see our exclusive gallery of pictures of the night, click here.