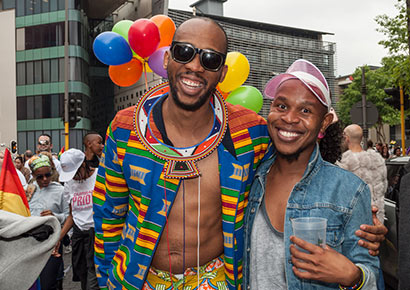 On Wednesday, in response to complaints from traditional leaders about its inclusion of sacred Xhosa initiation rituals, the Film and Publication Board (FPB) Appeal Tribunal re-rated Inxeba as an X18 hardcore adult film.

The internationally acclaimed movie was ordered to be pulled from all mainstream cinemas and may now only be shown in licensed adult premises.

In a statement, the organisers of the annual Pride event said that while male circumcision may have health benefits such reducing HIV and sexually transmitted infections, its cultural use was often detrimental.

“[Circumcision’s] application as part of the initiation into ‘manhood’, whether it be practiced in the Xhosa, Kisii, Bamasaaba, Bakusu or any other such ‘tribes’ worldwide, remains sexist, heteronormative as well as cisnormative to the core,” said Johannesburg Pride.

The organisation argued that the cultural belief that snipping a piece of foreskin off a penis in a ritualistic process in which a boy is said to become a man “buys into the sexist notion that gender is determined by what dangles or snuggles between one’s legs”.

“Furthermore, it spits in the existence of those born ‘intersex’. What must those who by chance identify as a man have snipped off to become a ‘man’ while retaining their biological genitalia (which is often dictated by cisnormative ‘values’ that the genitalia has to be ‘corrected’)?” she asked.

Johannesburg Pride said that the FPB’s re-rating of Inxeba due to elements of “(gay) sex, language, nudity, violence and prejudice while banning it from playing at mainstream South African cinemas amounts to homophobia, transphobia and flies in the face of constitutional values”.