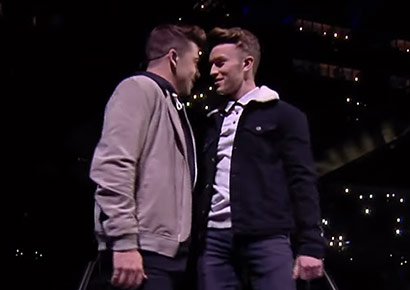 The Eurovision Song Contest has announced that a Chinese broadcaster will not be allowed to show Saturday’s final after it banned a gay-themed performance.

On Tuesday, broadcaster Mango TV showed the first semi-final of the 2018 Eurovision Song Contest live in China but completely removed two of the performances.

The one, Albania’s entry, was blocked because it violated a Chinese ban on showing tattoos on TV. The other, Ryan O’Shaughnessy’s performance of the song Together, was cut because it includes two male dancers portraying a gay couple.

Mango TV, which is owned by the state, also blurred out rainbow flags that were held up by audience members during other sections of the semi-final show.

In a statement, the EBU (European Broadcasting Union), which organises the popular international song contest, said that Mango TV’s actions were “not in line with the EBU’s values of universality and inclusivity and our proud tradition of celebrating diversity through music.”

It confirmed that, “It is with regret that we will therefore immediately be terminating our partnership with the broadcaster and they will not be permitted to broadcast the second Semi-Final or the Grand Final.”

Under censorship rules introduced in 2016, China outlawed the depiction on television of “abnormal sexual relationships and behaviours, such as incest, same-sex relationships, sexual perversion, sexual assault, sexual abuse, sexual violence, and so on.”

The video of O’Shaughnessy’s song, on which the stage performance is based, also features a male same-sex romance, as portrayed by two dancers in the streets of Dublin. 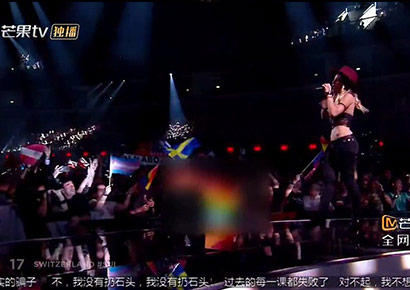 O’Shaugnessy welcomed Mango TV’s axing by the EBU over its ban of his song. “From the very start we’ve said love is love,” he commented in an interview with the BBC. “It doesn’t matter whether it’s between two guys, two girls or a guy and a girl so I think this is a really important decision by the EBU.”

O’Shaugnessy added: “They haven’t taken this lightly and I think it’s a move in the right direction so I’m happy about it.”

Songs from twenty-six countries have been selected to compete in the 3.5 hour-long Grand Final on Saturday, held in this year’s host city of Lisbon, Portugal. The finalists include both Ireland and Albania’s entries.

Now in its 63rd edition, the annual Eurovision Song Contest has a massive global gay fan base, which only seems to grow by the year.