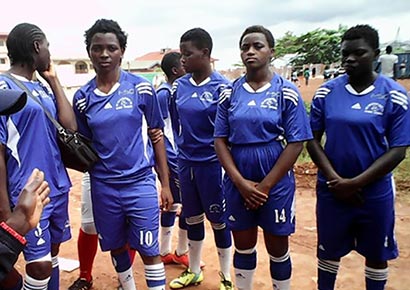 Members of the Intersport football club

A promising footballer in Cameroon has spoken out about the ordeal of being thrown off her team because she is a lesbian woman.

As reported by activist Steeves Winner, Stenie (not her real name) joined the Yaoundé-based Intersport football club in 2013.

The talented 18-year-old hoped to make a career out of the sport and, despite facing ongoing abuse, became a professional at the club two years ago.

Stenie said that during this time she was called homophobic insults such as “rug muncher” and barely escaped an attack by two men.

In November, her dreams were shattered when the Intersport manager and coach told her that she couldn’t be on the team because public pressure related to her sexual identity was putting the club’s success in jeopardy.

“The next day a teammate called to tell me that Intersport convened a meeting of players and staff to say that any homosexual acts would be punished,” Stenie revealed. “They cited me as an example and announced that I was permanently excluded from the team.”

She tried to appeal the decision with the national football federation. “They also rejected me, merely saying that they do not support homosexuality. I learned that the federation had decided that I could no longer play for any club in Cameroon because of my sexual orientation.”

Efforts are now underway to help Stenie find another football club that is willing to take her on.

Also in Cameroon, Winner further reported that a group of anti-gay youths forced the cancellation of plans to host a Pride event in the port town of Kribi last weekend. The thugs vandalised the offices of Defense of Vulnerable People (Acodevo) and threatened to kill staff. Bowing to pressure, the group’s landlord has now refused to renew Acodevo’s lease.

Same-sex sexual acts are illegal in Cameroon, with penalties of up to five years in prison. There is no legal basis to arrest people simply because they may be gay or lesbian, although this has not stopped police from doing so. In May 2018, baton-wielding police raided a popular gay-friendly bar, cabaret and cinema in Yaoundé, arresting 25 people.