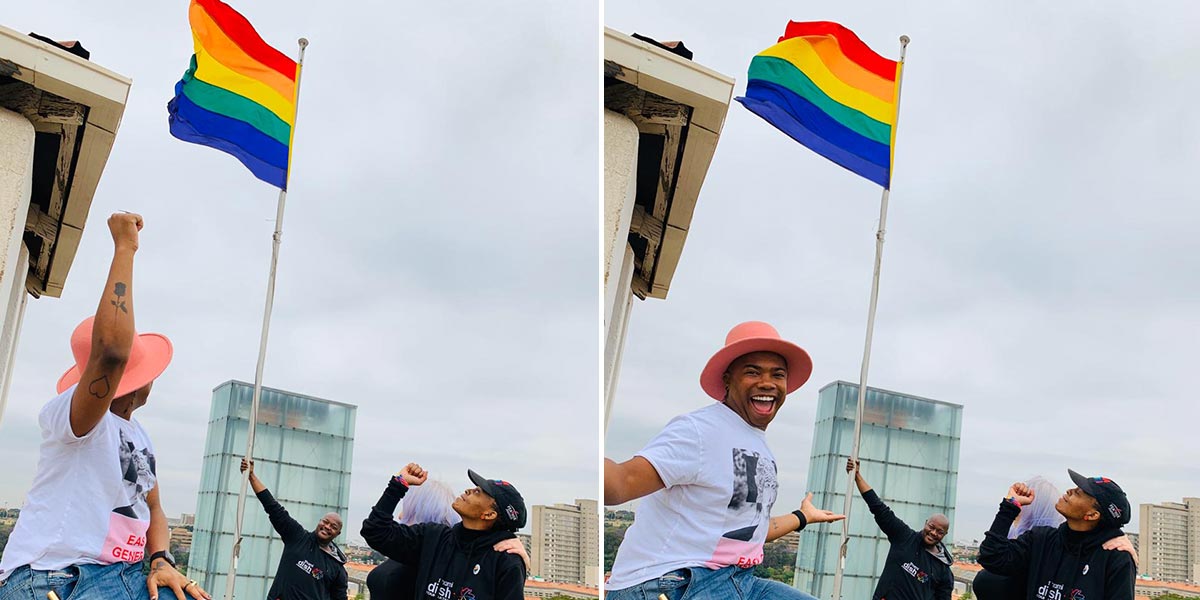 The Pride rainbow flag has been raised at the historic Constitution Hill in Johannesburg to mark Coming Out Day on Friday and Pride month in Gauteng.

The landmark flag-raising ceremony was initiated by the Thami Dish Foundation and the Feather Awards, which take place next week, in partnership with Constitution Hill.

“Where better to raise the rainbow flag than at Constitution Hill,” the award’s founder, Thami Kotlolo, told MambaOnline. “It’s the highest court in the land and is a national heritage site.”

Jay Matlou, Head of Programmes for the Thami Dish Foundation, said that the flag’s placement at Constitution Hill was “a pivotal moment” and shows that “we do matter.”

He continued: “Hopefully, this will also be an inspiration for other fellow African countries such as Uganda, where the ‘kill the gays’ law is being considered.”

Constitution Hill in Braamfontein is the seat of South Africa’s Constitutional Court which has made landmark judgements in favour of the LGBTQ community’s right to equality and dignity.

This includes confirming the decriminalisation of homosexuality in 1998 and, in 2005, ordering the government to recognise same-sex civil unions and marriages.

South Africa’s post-apartheid Constitution, which is the basis of the court’s rulings, was the first in the world to explicitly outlaw discrimination based on sexual orientation.

The hill was formerly the site of a fort which was later used as a jail where figures such as Mahatma Gandhi and Nelson Mandela were imprisoned.

The rainbow flag will fly at the site for the rest of the month as the province marks Pride through a series of events, including the upcoming Feathers Festival and Johannesburg Pride on 26 October.

The 3-day Feathers Festival takes place from 17 to 19 October at 1 Fox Junction and will include the Feather Awards, a market, an art exhibition, a fashion event, a music concert and more.