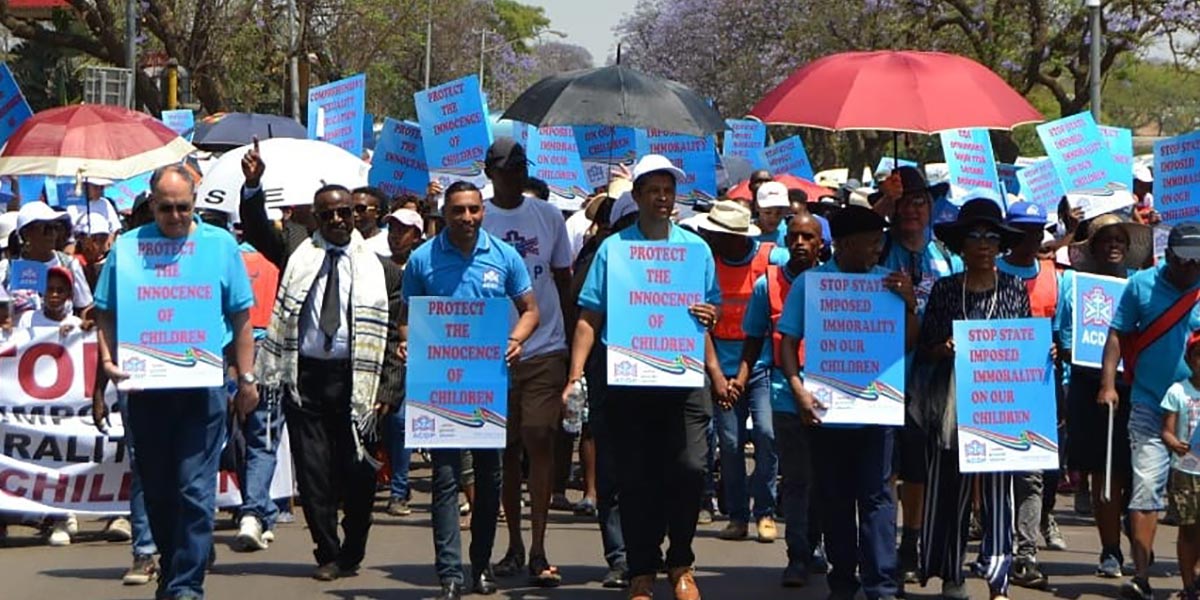 Members of the party marched to the office of the Department of Basic Education in Pretoria aiming to “put a stop to government’s plan of introducing Comprehensive Sexuality Education (CSE) into the country’s Life Orientation syllabus.”

In May, it was reported by the Sunday Times that the department was in the process of overhauling its textbooks to be more inclusive of sexual and gender minorities and same-sex families.

“A task team found that there were inconsistencies and there was bias towards certain people [in the textbooks],” Department spokesperson Elijah Mhlanga told MambaOnline. “For example, we found that the concept of family is represented as being between man and woman, whereas in the country today, we could have a man and a man with a child or a woman and woman with a child. That is also a family. But in our textbooks, that’s not reflected as such. These inconsistencies are going to be dealt with and the process has already started to fix it.”

ACDP President Rev Kenneth Meshoe, however, believes that inclusive and progressive sexual and life orientation should be kept out of schools.

“Politicians are entitled to their immorality, but they must not impose it on our children. We refuse to allow government to poison the minds of our children,” he said.

“The President of Ghana has said he will not allow CSE to be taught to his children, and we want President Ramaphosa to do the same. South African children already come last in maths and science, but first when it comes to knowledge of sex,” Meshoe continued.

The ACDP leader explained that the party supports the current sexuality education programme taught in Life Orientation that offers “a basic understanding of anatomy and biology.”

CSE, however, is “anti-family, anti-marriage and anti-Christian,” insisted the party in a statement.

According to the ACDP’s memorandum to the department, CSE “promotes sexual pleasure as a right and an important component of sexual health; encourages young children to experiment sexually with individuals of their own or the opposite sex; encourages acceptance and exploration of diverse sexual orientations and gender identities among 5- to 10-year-olds; claims access to CSE is a human right; and teaches children and youth they are sexual from birth.”

Two representatives from the Department of Basic Education were present at the protest to sign the memorandum.

The ACDP, which has four seats in Parliament, is known for its anti-LGBTQ views. The party previously blocked two LGBTQ-affirming motions in 2011 and in 2015, including a condemnation of homophobia. The ACDP also voted against the passage of the Civil Union Bill that legalised same-sex marriage in 2006.