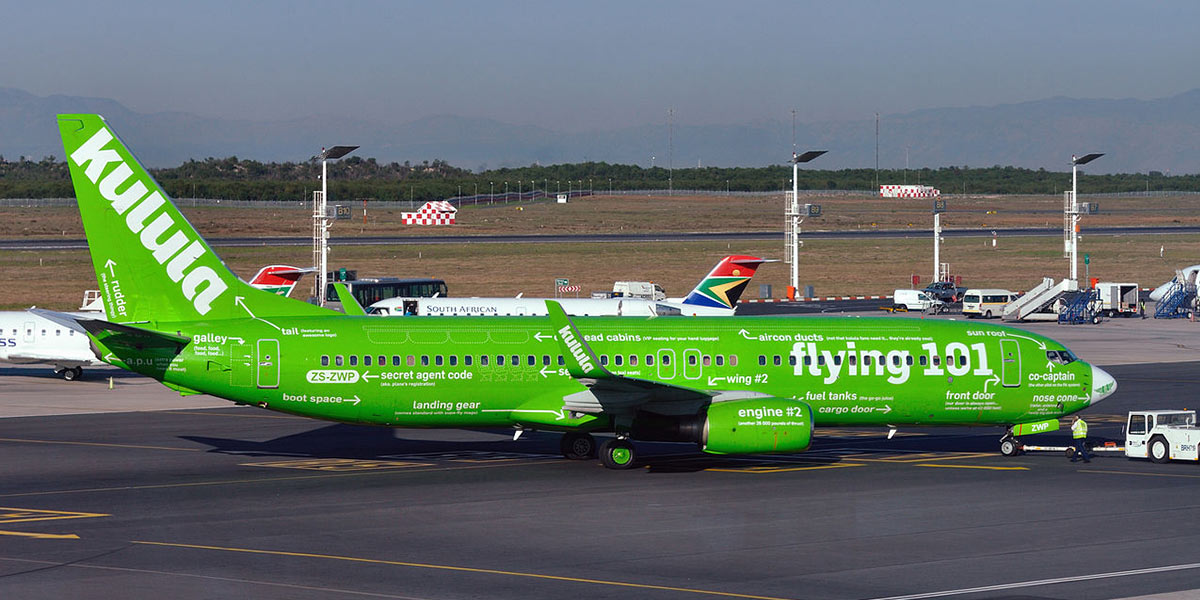 A man alleges he was abused by a racist and homophobic passenger on a Kulula flight and claims that airline staff threatened to throw him off the plane when he reacted.

We will refer to the victim as Steve as he has asked not to be named. He told MambaOnline that the incident took place on a flight from Cape Town to Johannesburg on 13 March.

While this was before the lockdown was announced, Steve, a black gay man, was already concerned about the coronavirus and wore a scarf over his mouth and nose as protection.

After he boarded the flight he was seated on an aisle seat with a white couple, a man and a woman, placed next to him. The man sat on the window seat and the woman was located directly next to Steve.

Steve became aware that the man, in particular, was staring at him, making him feel uncomfortable. He says that he was shocked when the man, unprovoked, allegedly commented that he “cannot sit next to a swart moffie.” (“Swart” is an Afrikaans word for black and “moffie” is a derogatory Afrikaans term for gay.)

Steve responded that the airline was open to the public and that “if he can’t stand black people or moffies he should use a private jet.” The two got into a verbal altercation and at one point, Steve alleges that the man knocked his phone to the floor, presumably because he thought he was being filmed, breaking the screen.

“The man’s homophobic and racist comment really sparked anger in me, in that in a democratic country and rainbow nation, as we always call ourselves, we still have people who use such words,” Steve said.

A flight attendant intervened and instructed Steve to keep quiet or be ejected from the aircraft, despite him being the one allegedly victimised by the homophobic and racist passenger. Another passenger who witnessed the incident offered to exchange seats with Steve elsewhere on the plane.

Steve says that the flight attendant then came back to him and told him that he had been given a “red card” by the captain and would be taken off the flight if he said anything further. No action was apparently taken against or warning given to the allegedly homophobic and racist passenger.

Steve reported the incident to a Kulula representative when he landed at Lanseria Airport in Johannesburg. He also corresponded with a Kulula customer relations representative via email who promised to assist, but he says there has been no resolution.

Steve remains upset as he feels he was not protected or supported by the airline staff. “The flight attendant’s response made me feel angry and it really showed that the airline does not have the best interest at heart for all its customers,” he said. “The flight attendant should have protected me after hearing my side of the story and should have asked fellow passengers what happened.”

Steve added: “The airline’s response to my case proves that it’s easy for companies to say they comply with the country’s Constitution yet when practical situations come up no action is taken.” He has called on the airline to reveal the name of the man who allegedly abused him and to cover the cost of repairing his phone.

Moude Maodi-Swartz, Paralegal Officer at OUT’s Love Not Hate project, is assisting Steve with the matter. “Twenty-six years into South Africa’s democracy, no one should be subjected to discrimination of any kind and it is quite disappointing to find that a large entity such as Kulula airways failed to address the incident in light of South Africa’s Constitutional values,” she commented.

Maodi-Swartz said that the responsibility to uphold South Africa’s Constitution “does not rest solely with judicial bodies, this responsibility rests upon all citizens in their personal and professional capacities to respect all individuals regardless of their race, sexual orientation, gender, socio-economic status, religion or culture and all should be afforded respect as human beings.”

She expressed her dismay at “how the victim was warned and punished” for voicing the violation of his fundamental rights. “We commend [Steve] for reporting this violation and for exercising his rights and encourage all victims of such treatment to speak out in order to hold perpetrators accountable,” Maodi-Swartz said.

MambaOnline contacted Kulula for comment about the incident and we were sent the following response from a representative: “Comair, which operates kulula.com, runs its business with integrity, fairness and transparency. We have zero-tolerance for racism or any form of discrimination.”

Comair went into business rescue last month in a bid to keep the low-cost airline afloat in the wake of the Covid-19 lockdown, which has kept aircraft grounded.

The company said it is aware of the incident and has made contact with Steve to resolve the matter, stating that, “We do apologise for the regrettable experience [Steve] had onboard our Kulula.com flight.”

Comair further stated: “It is against industry regulation for airlines to divulge any customer information. Customers may, however, follow a subpoena process should they wish to pursue legal action against a fellow passenger. This information was relayed to [Steve] at the time he reported the incident to our Customer Relations team.

“In order to ensure the safety and comfort for our customers and crew aboard out flights we spend a lot of time in training our employees on customer care and managing difficult interactions with or between customers. Each incidence of misconduct brought to our attention is investigated and dealt with accordingly.”

Steve has rejected Kulula’s response, insisting that he has not been contacted by the company since 7 March when he received an automated reply to his e-mail query that stated: “We are currently experiencing high volumes of email correspondences, therefore please expect a delay in response.”

“No-one has been touch with me since then,” he said, adding that he is now exploring his legal options together with Love Not Hate.

Hate speech and discrimination are a daily reality for many in the LGBTQ community. We recently reported that television personality Innocent Matijane was refused service by a homophobic shopkeeper because he is gay.