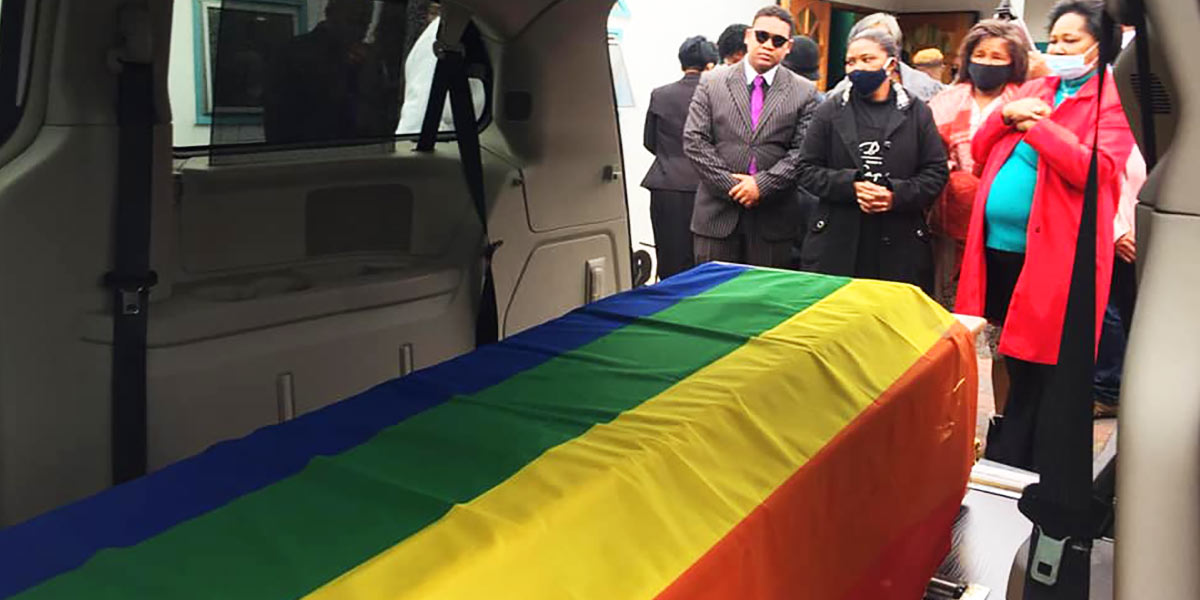 Kirvan Fortuin was laid to rest on Sunday after being stabbed to death in a suspected hate crime (Photo: Tatijana Lopez)

Slain queer dancer, choreographer and activist Kirvan Fortuin was laid to rest on Sunday with their coffin draped in the LGBTQ rainbow flag.

Fortuin’s funeral was held at the PPK Church in Macassar where the community gathered to say their final farewell to the acclaimed 28-year-old performance artist.

The funeral procession to the church was led by the Field Band, a local group of which Fortuin was a member in their youth.

While only 50 people could gather in the church due to the Covid-19 restrictions, many more congregated outside to show their support for Fortuin’s grieving family. The event was streamed on Facebook for those who could not attend and has been viewed more than 20,000 times.

An emotional slideshow and video featuring Fortuin dancing were included in the service, set to the Prince song Purple Rain; one of the performer’s favourite songs. Their family and community were praised for accepting Fortuin for who they were. Fortuin was remembered as a talented young life who had left a legacy affirming that the children of Macassar can make their mark in the world.

The coffin was driven to the church draped in the South African flag but was later covered with the LGBTQ rainbow flag. The flag symbolised not only their identity as a queer individual but also their commitment to the rights and equality of LGBTQ people, close childhood friend Tatijana Lopez told MambaOnline.

“We went to the family while planning the funeral and asked if they would be okay if we include the flag as part of Kirvan’s final journey to the gravesite,” said Lopez. “Kirvan was unapologetically queer, proud and out there. We also believe that this was a hate crime, based on what witnesses have told us, and we feel that it was an appropriate way to lay him to rest.”

Fortuin, who identified as gender non-conforming, died on their way to the hospital in the early hours of June 13 after being attacked; allegedly by a 14-year-old girl.

It’s believed that Fortuin was socialising at a friend’s house in Macassar and reportedly had an argument with the girl before she allegedly stabbed him twice in the chest. MambaOnline has been told that the girl allegedly made homophobic comments to Fortuin before and after the stabbing.

Fortuin, a trained dancer who worked in South Africa and the Netherlands, was also a leader in the voguing and ballroom culture scene in the Western Cape. Their choreography has been performed at festivals locally and abroad. Last year, they were honoured with a Ministerial Award for Outstanding Contribution to Preservation and Promotion of an Indigenous Art Form.

The young girl accused of murdering Fortuin has been arrested and is being processed under the Child Justice Act.