The LGBTI community in Eswatini is waiting to hear if the nation’s high court will order the government to finally register an LGBTI rights organisation.

On 20 October, the Eswatini High Court heard oral arguments in a case centred on the government’s ongoing refusal to register Eswatini Sexual and Gender Minorities (ESGM), an NGO that advocates for the rights of the LGBTI community.

Legal representatives from ESGM and the state laid out their positions to a full bench of the court in Mbabane. In September 2019, the government, through the Registrar of Companies, officially rejected ESGM’s application for registration.

The state told the three judges that it cannot register the organisation because it is “pursuing an unlawful purpose” contrary to the Companies Act. The government further argues that the constitution prohibits same-sex marriage and that sodomy is outlawed. It also believes that the group’s aims violate the customary and traditional values of the kingdom, even citing biblical passages, including the story of Sodom and Gomorrah, to justify its stance.

While sodomy is illegal, responded ESGM, being gay and advocating for the interests of the LGBTI community is not and therefore its purposes is not unlawful.

ESGM argues that the registrar’s refusal has violated its members’ constitutional rights to dignity, to associate and express themselves freely, to be treated equally and to not to be discriminated against. The group said these rights are fundamental and applicable to all the nation’s citizens, citing the Yogyakarta Principles on sexual orientation and gender identity. 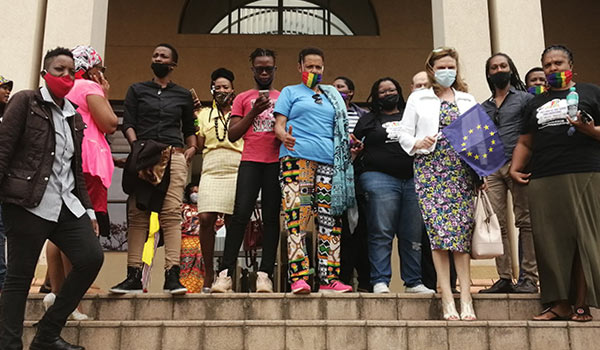 The hearing was attended by the EU Ambassador to Eswatini, Esmeralda Hernandez Aragones, who urged “the Registrar of Companies to reverse his decision and to take appropriate action to accordingly register the ESGM association.”

Melusi Simelane, Executive Director of ESGM, described the government’s arguments as “ridiculous” and without legitimacy. “It was very interesting listening to the judges asking very pointed questions that speak to our protection in the country, that speak to international practice and universal rights.”

The court deferred the ruling pending further deliberation. “We are eager to hear the judgment but we are very confident in our case,” Simelane said.

A summary with some very brief comments on the government’s submissions in @EMinorities registration case. 1/19